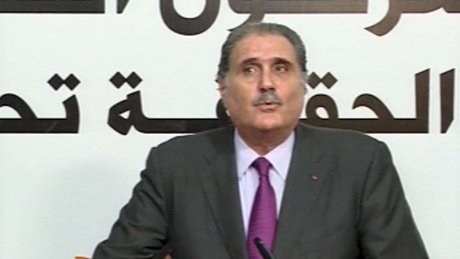 Describing Aoun as “the nominee whose candidacy conforms with the National Pact,” the bloc boasted that the FPM founder “has become immunized with broad support” from the majority of the political parties.

“The (Oct. 16) speeches of General Aoun and (FPM chief Jebran) Bassil carried all the indications about a project to build the state with all the country's components without the exclusion of anyone,” said the bloc in a statement issued after its weekly meeting.

“The National Pact is not bilateral or tripartite but rather for everyone,” it stressed.

“Any remarks about Christian-Sunni bilateral powersharing are unacceptable and seditious and we will confront any attempt to stir sedition,” the bloc added.

And reassuring that “the project of the state” is its “unifying project,” Change and Reform stressed the importance of “passing an electoral law that ensures correct representation in line with the National Pact.”

Earlier in the day, Berri's aide and Finance Minister Ali Hassan Khalil confirmed that the speaker's Development and Liberation bloc would “vote against” Aoun in any presidential election session.

In remarks published Tuesday in al-Akhbar newspaper, aides to Berri had also accused Aoun and ex-PM Saad Hariri of seeking to undermine “the partnership with political Shiism that followed the Taef Accord.”

Where is tric.portugal now:)) will he tell us about the hariri-daeshi-mecca not wanting his supreme christian leader. I don't know why i remembered him:)

Tric Trav was only a fake name...

I think the masks have finally fallen :

will aoun accept being elected by an illegal and illegitimate parliament?

The taqiyah always gets exposed. Shiites usually use their taqiyyah on the orthodox Muslims (sunnis) but in lebanon it's also heavily been used on christians and many christians fell for it just like many Muslims fall for it.

Yalla mystic waynak? How will you appear this time? As a maronite? Hehehehe

i dont see what you're trying to say. taqqiyah means allowing to hide your religion if it would lead to you being persecuted and/or killed (and it exists for all muslims not just shiites).
but trying to figure out your comment, are you saying that shiites are not telling christians they are shiites? how is that relevant? how does that make sense?

Bold and Factual as ever
@mowaten
What can one say, another E-X-C-E-L-L-E-N-T comment. I particularly enjoyed the part where you said "(and it exists for all muslims not just shiites)"
Thank you for making our lives so much better.
Thank you
Still laughing since January 2015.

"Taqiya (Arabic: تقیة‎‎ taqiyyah/taqīyah, literally "prudence, fear, caution") is an Islamic term referring to precautionary dissimulation or denial of religious belief and practice in the face of persecution.

This practice is emphasized in Shia Islam whereby adherents are permitted to conceal their religion when under threat of persecution or compulsion. However, it is also permitted in Sunni Islam under certain circumstances.

Taqiyya was initially practiced under duress by some of Muhammad's Companions. Later, it became particularly important for Shias due to their experience as a persecuted religious minority."

Why use buzzwords when you don't know what they mean? Think it makes you sound cool and informed?

you trolls keep whining about the fact that i'm an atheist, let me make this clear: i dont give a duck what you think. i am against your lies and sectarian incitement, your fake claims and rotten propaganda, and i dont need to belong to any sect for that.

At 5 in the morning Sleepless in Dahieh once again. Do you ever sleep?!

of course you do give a duck and more: you posted 7 hours ago, 5 hours ago, 3 hours ago and just now. That is for sure a sign of someone who does not give a duck.

wow mowaten! 3an jad when do you sleep or take a break from the forum!

i read this article an hour ago before mowaten got his comment deleted showing he was posting at 4 in the morning:)))

I respect Mr. Mowaten for his thorough understanding of the Muslim faith despite the fact he is religiously independent.

all it takes is a google search, not everyone is happy being as ignorant as you.

the cards are on the table: after accusing hariri of obstruction for the last 2 years and using the FPM to pour their hatred on Hariri and who he represents, reality sets in now and we see who really does not want aoun. Spearheading the rejection of aoun are junblatt and berri while hezbollah sits on the sidelines letting his other half and partner in crime berri threaten of civil war.

Maybe it is time, I dont know what Berri's problem is here and why he is throwing a fit... pretty disappointing

it has to be the only time I read that mowaten does not know something:)

anonyme go take your pills, i'm not interested in reading your rants

Oh thanks anonyme! I was looking for a spokesperson of the FPM, seems like you're the perfect FIT

When it was Hariri who did not want aoun, mowaten of iran wrote poems, books, essays about why hariri did not want aoun ranging from his saudi roots, to regional and global events, all the way to hariri's financial problems never forgetting his life long sectarian hate for hariri. All of a sudden when Berri does not want aoun, the troll innocently says "I dont know what Berri's problem is here".

Taqqiyah at its best.

Go ask your hezb of terror and iran and you will know.

.mowaten. I'm not a big poster here but I have been using this site for over 40 years and recently I have been liking your posts, you're the only one informing these deluded ignorants. :)

mowaten, FT, and I (the_roar) are the 3 most informative posters on naharnet by 3 country miles. We are different yet similar and people are jealous of us because we are smart.

no, that's simply called "lying", no need to use buzzwords, especially when you dont know their meaning.

Taqiya (Arabic: تقیة‎‎ taqiyyah/taqīyah, literally "prudence, fear, caution")[1][2] is an Islamic term referring to precautionary dissimulation or denial of religious belief and practice in the face of persecution.[3][4][1][5] Another term for this concept, kitmān (lit. "action of covering, dissimulation"), has a more specific meaning of dissimulation by silence or omission.[6][7]

This practice is emphasized in Shia Islam whereby adherents are permitted to conceal their religion when under threat of persecution or compulsion.[3][8] However, it is also permitted in Sunni Islam under certain circumstances.[9][10]

Taqiyya was initially practiced under duress by some of Muhammad's Companions.[11] Later, it became particularly important for Shias due to their experience as a persecuted religious minority.[8][12]

you can thank me later

the iranian practices taqiah both in politics and religion. On one hand, he is the most sectarian anti sunni creature the world has known and claims he is an atheist to hide his true feelings. In politics, he tries but fails miserably to hide the truth, distorts it, and puts a spin on everything to make it suit his farsi roots.

He has been caught a 1000 times choking with his lies and propaganda not to mention his daily fake accounts.

Thats is taqqiah not persecution.

Lol mowaten. You sound like a shia. Didn't you try to pass of as an atheist with christian background? What atheist goes to such length to whitewash shia lies?

Don't even try to whitewash it. Taqiyyah in shiaism is deceivement and lying.

Don't come here with silly wikipedia as if it explains facts on the ground. Anyone can edit on wikipedia. Google taqiyah on taqiyah off to see an example of shiite taqiyah caught on tape.

Only a shameless liar or an ignorant fool can compare protecting ones life to deliberatly deceiving people as shiites do while thinking its halal!

Taqqiyah and Kitman have been so much used in past years to dissimulate the truth in politics that they have become equivalent to lying. We can see that everyday with Ebola and Iranian declarations. There is nothing to be proud of. The biggest specialists are the Alawites. They lie constantly.

Yes I never understood why naharnet never implemented a traditional forum with moderators and PMs... I mean there are so many fake accounts you never know who is who, and who is playing games. Very frustrating. I have made posts criticizing Hariri in the past without any type of profanity, and they were deleted.

don't worry there are enough of you who do and their comments are framed and voted up as a masterpiece.