Geagea: Aoun is Pragmatic, His Election as President 'Unpleasant' for Hizbullah 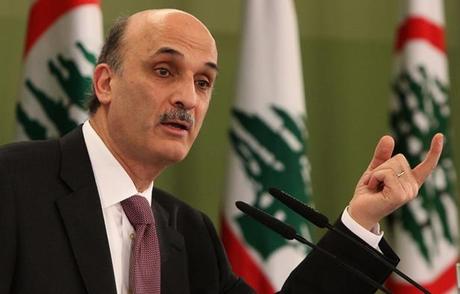 Lebanese Forces chief Samir Geagea stressed on Monday that the arrival of MP Michel Aoun to the post of presidency is “not favorable” for Hizbullah, as he stressed that the General (Aoun) is pragmatic in politics and does not adopt the strategy of Hizbullah.

Replying to a question on whether his support for Aoun means that he has become a partner of Hizbullah, Geagea said in an interview to the Cairo-based CBC TV: “General Aoun is pragmatic. Before 2005 he was against the Syrian tutelage and against Hizbullah. He has played a major role in the issuance of the US law on the accountability of Syria and has went personally to the Congress where he testified against the tutelage authority at the time.

“Since 1990 until 2005 he used to say that Hizbullah is in Lebanon under a Syrian-Iranian support. After he returned from exile in 2005, he did not find himself a place among the March 14 alliance and has thus behaved pragmatically and allied with Hizbullah. But he does not believe in Wilayat al-Faqih nor does he adopt the strategy of the party.”

Geagea made clear that when “Nasrallah verbally attacked Saudi Arabia and Bahrain in a speech, Bassil (Free Patriotic Movement leader) replied and said that the rhetoric of Nasrallah does not express their opinion. This is the best proof that Aoun's arrival at the post does not mean that Hizbullah did.”

The LF chief went on to slam allegations that a deal was struck between him and Aoun, he said: “The jurisdictions of the president are limited if compared to those of the president in Egypt. The general policy is usually approved in the government and it requires two-thirds of the votes. All political powers will be represented in the next government. We are in dire need of having a president.”

Geagea reiterated: “Hizbullah does not want anyone at the top state post because it originally does not want a Republic, but it cannot obstruct alone as it needs another power represented in General Aoun. Based on this fact, we faced two choices, either go with Hizbullah and break the Republic (keep the presidential deadlock), or pull Aoun out from there (nominate Aoun ourselves and pull him to our side.)

In that framework, the LF chief pointed out: “Because Aoun is a pragmatic person, when he becomes president his main concern will be to make the presidency succeed, which irritates Hizbullah. God willing, Saad Hariri (Mustaqbal Movement chief) will be the next premier, and the LF will be part of the government equation.

Geagea concluded by saying that “the arrival of Aoun to the presidency is not pleasant for Hizbullah, and in the end it will be forced to try to appear to accept it, but this will weaken the party in the long run.”

Gigi is out of date like an old newspaper.... Useless!

You have a gift for everything that is new and current. I love how you make complicated things so simple for the common reader to understand.

Keep up the good work

he's useless as a personality, different thing is that some christians voted his party so that can have representation in the parliament, so they can vote.

when you have 100,000 rockets and openly claim that your money, weapons, food, etc come from Iran you can afford to be a decision maker. Your definition of respect cannot be respected.

Geagea has spoken plainly' openly and correctly. He set this chain of events into motion and, God willing, the events will play out to the correct destination on October 31.

libanobrasil... you are useless here... you bring no added value to the debate... only insults...

Aoun is pragmatic like Trump loves Mexicans and respects women.

Reality always starts as a dream, maybe this one does not come to fruition, but the other way, the way of deadlock and paralysis made us all accomplices to the Hezbollah project for Lebanon. So, now we are on this course that may lead to an Aoun Presidency.
Aoun is not an ideologue. He follows whoever puts the hay out like a cow in a pasture. His mandate will include unsavory people like Thibran Bassil, but the Aoun Mandate will only last as long as he lasts. He has lived this long with poor health only to obtain the title of "President of the Republic". Once that has been achieved, he has nothing left on his agenda and we will be done with the Aoun effect, so that the next Lebanese President can be elected under more normal conditions and we get a more normal Presidency say like with Riad SALAMÉ. Aoun, first must be pushed through the system and flushed from the Body Politic.

Hezbollah is the best bet. Lebanon has really never been a republic but a territory.