PSP Leadership Voices Support for 'Settlement' in Meeting over Presidency 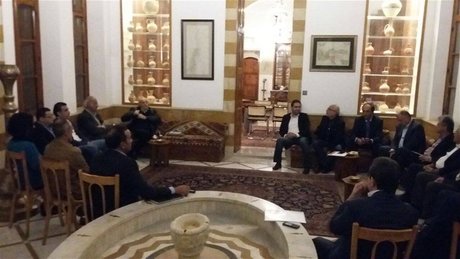 The leadership of the Progressive Socialist Party held a meeting on Tuesday to decide how to distribute the votes during the parliamentary election session schedule for October 31 to elect a president.

According to LBCI television, the meeting "mulled the presidential choices and reiterated its stance that supports holding the election in a manner that strengthens the atmosphere of internal agreements and boosts the settlement's chances."

The Democratic Gathering parliamentary bloc led by PSP chief MP Walid Jumblat had met on Saturday in Mukhtara where Jumblat said that a decision would be taken and announced this week.

A parliament session to elect a president is scheduled for the end of October, following several previous ones that failed to achieve quorum.

After his endorsement, Aoun visited Speaker Nabih Berri, who has openly announced that his bloc will not vote for the FPM founder and that it might join the ranks of the opposition.

Until this moment, Jumblat has not met with Aoun. A meeting was expected between the two men but it was postponed over health reasons related to Jumblat.

Reports have said that Jumblat is still hesitant on whether to vote for Aoun or not. He reportedly wants to maintain his good ties with Berri but at the same time he has fears over the electoral game in the Chouf district in the coming parliamentary elections.

Should he choose to stand against Aoun and Hariri, he would face the threat of a coalition between the FPM and the Mustaqbal bloc in Chouf, which would certainly lead to an inevitable loss for him, the reports said.

In this sense, Jumblat is trying to survive in a middle area until the final moments, according to the reports.

Walid Junblatt is one of the very few world leaders along with general Aoun working in the interests of Lebanon and not their sects. The rest....pffft.

Disgusting, isn't it, watching your political class approach this election with each one trying to secure their bit of graft and corruption before the next guy grabs his. And where is the interests of the Lebanese people being secured in all of this?? Seems that they are competing with each other only to make sure that each gets the biggest share of the public funds possible.

That political class is here only because you and your likes allowed it to be over the past 30 years. Either swallow it or stop whining and do something about it in the next elections, like uhmmm going out on a stretch here... voting for someone other than your usual thug ?

I'm not a citizen yet, but will become one before the next parliamentary election. This class, bro, is all on you chumps who have kept them around for the past 40 years.

You're all quibbling over the spoils of disenfranchising the Shia majority by Article 24. By the way, I assume Jumblatt is the only human member of the PSP. When the leadership meets, it's him down at the cafe talking to his newspaper.