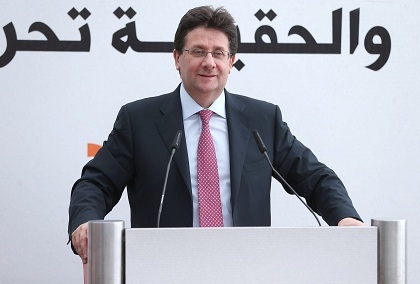 MP Michel Aoun's Change and Reform bloc reassured Tuesday that there will not be a “bilateral or tripartite approach” should Aoun be elected president, noting that it is still seeking to reach “national consensus.”

“The current presidential course that has emanated from national agreements based on Muslim-Christian partnership is an implementation of the National Pact in a manner that that shuns the approach of bilateral or tripartite agreements,” said the bloc in a statement issued after its weekly meeting.

“This is how we view the course of the agreements which we are seeking to complete in order to reach national consensus on the president,” it added.

And noting that the country will for the first time ever have a “made in Lebanon” president, Change and Reform said “the current initiatives have blurred the line between the March 8 and March 14 coalitions.”

“In light of the current national agreements, the bloc will take part in the Oct. 31 (presidential election) session to put the broad national agreements into effect and any talk of a possible delay of the session has become behind us seeing as most parties have confirmed that they would attend the meeting,” the bloc added.

“We want this vote to be a democratic election for entire Lebanon and our struggle will begin rather than end after the vote,” the bloc vowed.

Speaker Nabih Berri has voiced concerns over the Aoun-Hariri agreements that preceded the endorsement while openly declaring that his bloc will “vote against Aoun” and that it might “join the ranks of the opposition.”

noting that the country will for the first time ever have a “made in Lebanon” president.

any president nominated and forced by hezbollah is not "made in Lebanon" but in Iran.

but Aoun is supported now by Samir and Saad, how come!?

he must be responded by logic to shut him up, although he's a hard-head.

Just because the so-called "leaders" have capitulated to foreign powers doesn't make Lebanon any less of an occupied nation. What a disgrace...

The only problem which remains is the mental psychotic paranoia illness of a man at the top...