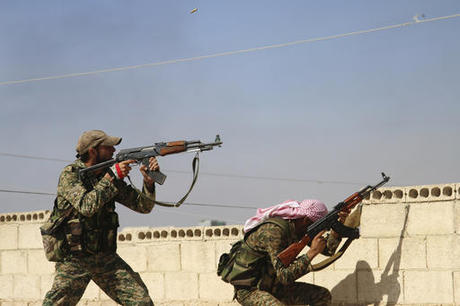 The rebels also targeted government positions east of Aleppo city and in the coastal province of Latakia, including the Hmeimim military base used by Russian forces allied with the regime.

Moscow says it has not bombed Aleppo since October 18, but senior Russian military official Sergei Rudskoi told a briefing Friday that the military had asked President Vladimir Putin for authorization to resume its air strikes.

"We have appealed to the Supreme Commander-in-Chief of the Armed Forces of the Russian Federation with a request to resume air strikes," Rudskoi said.

But the Kremlin said Putin did not agree.

"The Russian president considers it inappropriate at the current moment to resume strikes on Aleppo," Kremlin spokesman Dmitry Peskov said, adding that Putin thought it was necessary to "continue the humanitarian pause" in the war-ravaged city.

"The Russian side retains the right in case of extreme necessity to use all the troops and facilities it has to carry out support of the Syrian armed forces at the necessary level," he added.

Friday's rebel assault comes more than three months into a government siege of eastern Aleppo, where more than 250,000 people live, and several weeks after the army began an operation to retake the rebel east.

Rebel groups "announce the start of the battle to break the siege of Aleppo", said Abu Yusef Muhajir, a military commander and spokesman for Ahrar al-Sham.

The assault "will end the regime occupation of western Aleppo and break the siege on the people trapped inside", he told AFP.

"The breaking of the siege is inevitable," said Yasser al-Yusef, a member of the political office of the Nureddine al-Zinki rebel group.

The Syrian Observatory for Human Rights, a Britain-based monitor, said at least 15 civilians, including a woman and two children, had been killed, and more than 100 wounded in rebel fire on western Aleppo.

The monitor reported fierce clashes on multiple fronts on the western and southern outskirts of west Aleppo, with three suicide car bombs targeting a checkpoint in the Dahiyet al-Assad neighborhood.

Fighting was continuing in the area near a military academy, it said, but had no immediate toll.

An AFP correspondent in east Aleppo said the assault had boosted morale in rebel-held districts, with mosques broadcasting "God is greatest" from loudspeakers.

The Observatory said rebels had also fired dozens of rockets at the Nairab military airport and Aleppo international airport, both east of the city and government-controlled.

Rebels also fired rockets from Idlib province into the government stronghold of Latakia, killing one person and wounding six.

State television said "the army has foiled an attempt by terrorists to attack Aleppo city from several axes with suicide bomb attacks and has inflicted losses on them."

Once Syria's economic powerhouse, Aleppo has been ravaged by the conflict that began in March 2011 with anti-government protests and has since killed more than 300,000 people.

Aleppo has been divided between government control in the west and rebel control in the east since mid-2012, and in September the army announced an operation to recapture the whole city.

The U.N.'s aid chief Stephen O'Brien this week said Aleppo had become "a kill zone", adding that "nothing is actually happening to stop the war, stop the suffering."

But few did so, and a U.N. plan to evacuate the wounded failed because security could not be guaranteed.

Speaking in Moscow after meeting the Syrian and Iranian foreign ministers, he said: "Their inaction allowed the medical evacuation to be sabotaged."

U.N. chief Ban Ki-moon, meanwhile, condemned an attack on a school in government-held west Aleppo on Thursday that killed at killed at least six children, according to state media.

"Such attacks, if deliberate, may amount to war crimes," he said in a statement.

The legitimate syrian government will continue to cleanse syria with fire to cut off the salafi spawn.

The salafi will fail in this desperate attempt.

you were voted down because you apparently fabricated the video:) Good job and the more the merrier.