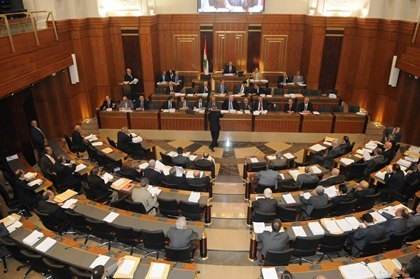 Marada Movement chief MP Suleiman Franjieh's call for the blocs that support him to cast blank votes in Monday's presidential election session might create a 40-member opposition bloc consisted of the MPs who resort to this choice, a media report said on Sunday.

“The idea of casting blank votes instead of voting for Franjieh was reached after consultations between Franjieh and (Speaker Nabih) Berri,” the pan-Arab daily al-Hayat quoted multiple political sources as saying.

The decision was reached after “the failure of Hizbullah's attempts to mend ties between Berri, Franjieh and General (Michel) Aoun.”

“Hizbullah recommended that there should not be a confrontational electoral battle between the allies, leaving the matter to Speaker Berri who conducted consultations with Franjieh that led to the white vote solution,” the sources added.

Sources that support Aoun meanwhile noted that the blank vote choice would serve to prevent a scenario in which Franjieh garners a meager number of votes compared to those that might go to Aoun.

“Many of those who oppose Aoun were going to resort to the blank vote choice instead of voting for Franjieh, such as Kataeb Party's MPs and other forces, whereas gathering the votes under the white vote banner would produce what a resembles a 40-member parliamentary bloc led by Berri,” sources said.

This bloc would have influence during the coming presidential tenure, the sources added.

I am with you and will boycott this election of the iranian traitor.

I came back from Koh Lanta just to witness the crowning of the Fouthian as President of a lost nation. Cutie; please do not boycott tomorrow coz we need you to comment. Jannah, Firdous, Gigi and I are planning to clean house and later on are having a party.

All the best Cutie

Any hints on who chose the to vote blank?