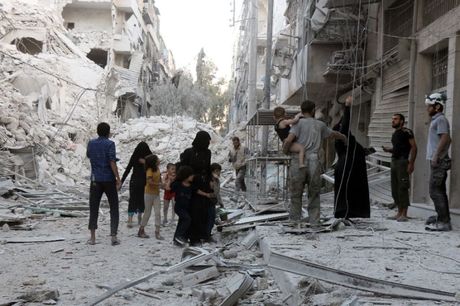 Russian Defence Minister Sergei Shoigu on Tuesday accused the US-led coalition in Syria of failing to rein in hardline rebels, and said the chance of a political settlement was now remote.

He said the coalition was "putting spokes in the wheel" of Russia's military operation in the country and failing to "act in unison".

"As a result, the prospect of the start of a political settlement and a return of the Syrian people to peaceful life has been postponed indefinitely," he said at a televised meeting with top brass.

He said rebels were shooting "dozens of peaceful civilians" every day for attempting to use humanitarian corridors set up by Russia out of rebel-held eastern Aleppo, which so far have seen only a trickle of people leave.

"Is that really opposition you can come to an agreement with?" he said.

Moscow has been conducting a bombing campaign in Syria in support of long-time ally Bashar al-Assad since September 2015.

Russia has now ceased air strikes on eastern Aleppo for 16 days, Shoigu said, after criticism over a Russian-backed Syrian government assault that has killed hundreds of civilians and destroyed infrastructure including hospitals.

Defiantly hitting back at Western opposition to Russian warships using European ports en route to Syria, Shoigu called on Western countries to "decide who they are really fighting: terrorists or Russia".

"Our ships' voyage caused a sensation among our Western partners," Shoigu said, adding that Russia was "particularly amazed by the position of certain countries which under pressure from the US and NATO publicly announced a refusal for our warships to enter their ports".

Russia last week scrapped plans to refuel Syria-bound warships in a Spanish port after Madrid came under pressure to refuse access to a flotilla that may be used to help attacks on Aleppo.

Shoigu insisted this did not affect the ships' schedule "since they are equipped with all the necessary resources".