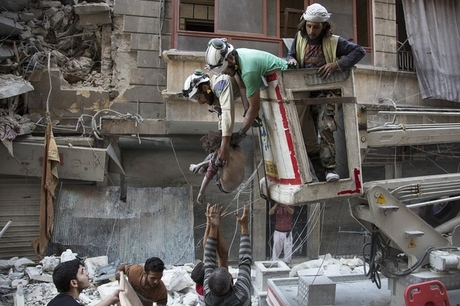 Syrian regime forces advanced quickly in rebel-held areas of Aleppo on Monday, pressing a new offensive in defiance of international concern over the fate of the city and its residents.

Both US President Barack Obama and the UN's Syria envoy expressed pessimism about the future of the city, where more than 250,000 people are besieged in the rebel-held east.

More than 100 civilians have been killed in the east since the regime's latest offensive began on Tuesday, according to the Syrian Observatory for Human Rights monitor.

The group said government forces backed by Iranian and Russian troops and fighters from Lebanon's Hezbollah had captured the eastern part of the Masakan Hanano neighbourhood.

"It is the most important advance inside the eastern neighbourhoods that the regime has made so far," said Observatory director Rami Abdel Rahman.

"If they take control of Masakan Hanano, the regime will have line of fire control over several rebel-held neighbourhoods and will be able to cut off the northern parts of rebel-held Aleppo from the rest of the opposition-held districts."

Abdel Rahman said the advance had both strategic and symbolic significance, because Masakan Hanano was the first neighbourhood to fall to rebels in 2012.

Syria's Al-Watan daily, which is close to the government, described the neighbourhood as the "biggest and most important stronghold of the gunmen" in Aleppo.

- Syria rebuffs UN plan -Once Syria's economic powerhouse, Aleppo has been ravaged by the conflict that began with anti-government protests in March 2011 before spiralling into a brutal war that has killed more than 300,000 people.

In mid-July, the regime surrounded the east, subsequently announcing an operation to recapture it completely.

Despite international outrage, including over the bombing of hospitals and rescue worker facilities, there has been little sign that foreign powers or the UN can stop the fighting in Aleppo.

Obama said Sunday he was "not optimistic about the short-term prospects in Syria".

"Once Russia and Iran made a decision to back (Bashar al-) Assad in a brutal air campaign... it was very hard to see a way in which even a trained and committed moderate opposition could hold its ground for long periods of time," he added.

Washington has long backed the uprising against Assad, but has not committed military resources like Iran, and particularly Russia, which last year began a aerial campaign in support of Damascus.

Moscow says it is not carrying out strikes on Aleppo, though last week it announced a "major operation" in neighbouring Idlib and central Homs provinces.

On Sunday, Syria's Foreign Minister Walid Muallem rebuffed a proposal from UN envoy Staffan de Mistura to halt fighting in Aleppo and allow the opposition to administer the east of the city.

Under the proposal, jihadist forces would have left east Aleppo, and both sides would cease fire.

But Muallem said the proposal would "reward terrorists".

"We told him that we reject that completely," Muallem said after meeting De Mistura in Damascus.

"The institutions of state must return to east Aleppo," he added.

- 'Time running out': UN -The top UN diplomat warned that time was "running out" for eastern Aleppo, adding that there was concern "instead of a humanitarian or a political initiative" there would be "an acceleration of military activities" in the city and elsewhere.

"By Christmas... due to military intensification, you will have the virtual collapse of what is left in eastern Aleppo; you may have 200,000 people moving towards Turkey -- that would be a humanitarian catastrophe," he warned.

The UN has also proposed a humanitarian plan for east Aleppo, involving the delivery of aid, evacuation of sick and wounded civilians and the entry of doctors to help treat residents.

De Mistura said Sunday the government had not agreed to that plan either, while rebel groups in Aleppo said they were in favour of the proposal.

The World Health Organization says there are no more functioning hospitals in east Aleppo, although it was impossible to confirm that independently.

The agency said some health services were available through small clinics, but there was no longer access to trauma care or major surgery.

The UN Security Council is scheduled to meet later Monday in New York to discuss humanitarian efforts in Syria.

White helmets are Al Qaeda, so they are not considered civilians.
Legitimate targets.

so is every shia in dahieh

for the Israelis, Dahiye residents were the target during 2006, but for future wars, Tel Aviv settlers like you will be the ones.