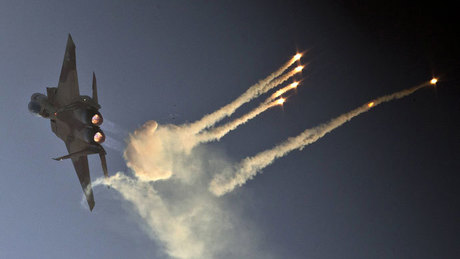 The Israeli air force fired two missiles at dawn on Wednesday that hit near Damascus, which Syrian state television said were launched from Lebanese airspace.

The airstrikes caused no casualties, the television said.

"The air force of the Israeli enemy today launched two missiles from Lebanese air space," it said, adding that they hit the Sabbura area west of Damascus.

Israel, which is technically still at war with Syria, has sought to limit its involvement in its neighbor’s five-year conflict.

But it has carried out sporadic sorties against Lebanon's Hizbullah inside Syria, which has forces fighting in support of the Damascus government.

I have always said that now with the Russian S-400 deployed in Syria, even a fly cannot fly without Russian permission.

as underlined in the article, the missiles were fired from long range. the israeli warplanes never entered syrian airspace. i guess the only solution now would be to take down any israeli plane flying within 200km from syrian soil, (note that this includes most of occupied palestine's airspace)

how many hours of sleep did you get in the last 24 hours? hardly any.... i know.

You never cease to amaze us with your knowledge... even in military and aerial combat you seem to know it all. well said

Only reason Israel "supposedly" bombed isis was because they wanted to act like they are fighting them but in reality the Resistance is the real target.

In case anyone wondered
http://www.jpost.com/Israel-News/Politics-And-Diplomacy/Putin-to-Netanyahu-Were-unconditional-allies-in-the-war-against-terror-456193

Russia will not allow their anti air weapons to be used against Israeli jets.

justince: thank you for your concern about the quality and quantity of my sleep, it is much appreciated, but stick to relevant subjects please.

I respect Mr. Mowaten's need for privacy when it comes to his sleep and posting patterns specifically in the areas of quality versus quantity of sleep.

Always going where no one else dares

@mowaten
What can one say, another E-X-C-E-L-L-E-N-T comment. I particularly enjoyed the part where you said " the only solution now would be to take down any israeli plane flying within 200km from syrian soil "

Still laughing since January 2015.
Thank you

Actually, you wouldn't know the difference. All it did was elevate the israeli's weaponry/practices/capabilities. Not like they're going to downgrade in response.

"استهداف قافلة لـ”حزب الله
I hope they find their body parts in 44 different places;) all i care about is that they get what they deserve, like all foreign troops on any arab soil.

"...were launched from Lebanese airspace."

for Lebanon, the next step is to acquire air defence systems!!! there is a little hope that the army could achieve that due the Israeli boycott.... the resistance must go ahead.

btw, America, France or England could help the amy by providing bullets and obsolete machine guns, the zionist lobby chooses the harmless weapons.

the world doesn't end at S400! try to think although it is hard for you, right! you little brown thing....

hahahaha FT, that's a smack on the nose i believe :D

"Instead we see Israel lobbying Obama not to bomb Assad, and Israel encouraging Russia to save Assad and then Israel mediated the Russian Turkish rapprochement to align Turkey to Russian view on Syria"

and where did you... "see" that exactly? I thought you were going to stop taking psychoactive drugs...

As the great flamethrower wisely noticed why haven't Iran been attacked by their own supposedly mortal enemies the Takfairi terrorists of ISIS, luck I guess too busy attacking Iran and the Syrian regime's other enemies.

When you say "zionists" do you mean Jews?

no when we say zionists we usually mean.. zionists! you know, those stinking, murdering, plundering, ethnic-cleansing, hating sobs.

It has been reported that —mowaten— never takes a break. He wakes up and reads Naharnet before taking the morning leak, for breakfast he starts harassing the community, and it goes on and on like this all day and night long till he collapses and falls asleep in his bed holding his phone....Instead of talking to his wife, he talks to us!

the troll never sleeps, never works, his whole life is trolling the forum. He posts at 3 and 4 in the morning like clockwork. Pitiful creature

I'm confused. SOme say Israel is allied with nusra and isis. Now you claim they are allied with Syria. WHich one is it?

Good, they strike back on behalf of Lebanon. So it is a brotherly missile from Lebanon to our brethen Syria.

hahahaha anonyme, really?? you make random claims and when i ask you for any sort of evidence you ask ME to prove the opposite? you need therapy!

Ever heard of friendly fire bonehead? Ever heard of the Syrian army in Lebanon bombing their own soldiers while advancing in Tripoli during tawheed, or bombing hamra or west Beirut from mount Lebanon to ignite internal divisions.