Feltman in Beirut on Wednesday, Says U.S. Has Evidence that Hizbullah Helping Assad 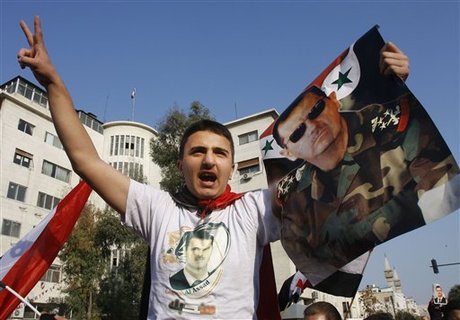 U.S. Assistant Secretary of State for Near Eastern Affairs Jeffrey Feltman has said Washington has evidence that Tehran and its Lebanese ally Hizbullah are bolstering Syria’s Assad regime.

The U.S. has "evidence" that Iran and Hizbullah have agents in Syria to bolster Assad's waning regime, he said.

The top diplomat for the Middle East said Assad is responsible for deepening the sectarian division in Syria.

Feltman told reporters that Washington has been in touch with Syrian Christians to prod them "not to stand on the side of the attacker," but declined to elaborate.

Many among Syria's Christian and other minorities have sided with Assad's regime, fearing they would be targeted if the Sunni majority takes over.

Feltman is expected to arrive in Beirut on a two-day visit on Wednesday.

By Monday, it was not yet clear with whom the diplomat will hold talks. Informed sources told An Nahar daily that he will most likely meet with Premier Najib Miqati and Foreign Minister Adnan Mansour.

He could also hold talks with Central Bank governor Riyad Salameh and other officials, they said.

However, the sources didn’t confirm whether Feltman will meet with Speaker Nabih Berri who had rejected to have any contact with the U.S. official over WikiLeaks cables.

Feltman told reporters that Washington has been in touch with Syrian Christians to prod them "not to stand on the side of the attacker," but declined to elaborate.
Now this Christians have to worry... this is a green light to target them.. and its in black and white

If Syrian Christians want to be in the right side of history they have to help their brothers ovethrow this tyrant.

Otherwise they will deserve what happens to them.

Christians must rememebr that Assad has done everything he can for 29 years to enslave christian Lebanese: Killing of B Gemayel, R Moawad.
Exile of aoun, Imprisonment of Geagea.
Bombardment of Ashrafieh in 1978, 1981,1985 etc..
Siege of Zahle in 1981.
Massacres in asouf in 1983 and East saida in 1985 (they were arming PSP and Palestinians)
Damour 1976..done by saika.

should I continue..Christians should never forget that and they should be the first one (even before Sunnis) to take revenge on Assad

This is what Sweat Demon want... extremists (Hezb) to protect a Tyrant (Assad) against other extremists (Salafists)!!
Yes sweat D, the 200 murdered children are salafists no doubt!

Those people were targeting in Lebanon not because of their religion, but because of their patriotic stands. Let's make that very clear because we know the Asaads protect Christians in Syria, that's a fact. And if this is going to be a competition between who is a bigger friends-- why don't we ask Feltman about the state of the Christians in Iraq. I don't care for Bachar, but let's not feed into this nonsense. This right-wing mentality of yours has no basis or any credence considering it's utter failure these last 30 years in Lebanon. It's over.

Lebanon has evidence that the US is helping Israeli enemy occupiers.

This Zionist Jewish Thug only mission is to help the Racist Israeli state. Here he is trying to turn Lebanese further against each other over Syria. He needs to understand that this will not work and Israel's years as an Apartheid state is numbered.

Pragmatism!!!! what is over it is just the begining of the end for this tyrant.

Bashar IS NOT PROTECTING anybody he is just using Xtian fears from extermists to keep them quite, use them as Saddam did ..but they are not more than DHIMMIS. give the name of ONE influential Christian politician or military in Syria .

If being pragmatic is accepting to be humiliated every day in places Lassa, Zahrani, Furn El Chebak, Haddad, and to shut up when they shoot an helicopter of our army or when they decide they want to wave a war against another country to protect Syria and iran than I am proud to be right wing every day.

I am proud because in the 1970's we were alone and we have resisted and now 95% of arabs most of lebanese from different sects have the same idea of nationalism.
So if you are SO PRAGMATIC you would not support a loosing side but would try to do your best to get in touch wuith the future rulers..it seems even Iran has undesrtood that

Obviously Truly Lebanese is truly young and has not lived the period when the Syrians were in Lebanon because it served the political agenda of older Feltmans and when most of the current Christian Lebanese Politicains were cuing in anjar or the Damascus Sheraton Lobby to get favours from the Assad clan .
In Lebanon, all of us have our version of right and wrong and we stick with it and have been in civil strife since more than 40 years. The facts are that there are no more Christians in Palestine, very few in Iraq and a fast shrinking community in Lebanon and Syria.
In any case, and knowing that your opinion is (curved in stone) , I suggest that you google the word "prod", and figure out what is coming..