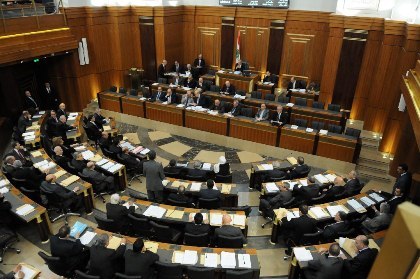 The parliament held its first legislative session in 2017 on Wednesday after quorum was met with 65 lawmakers, in a meeting that was chaired by Speaker Nabih Berri.

The controversial electoral law is not on the agenda of the two-day legislative session.

Out of 73 draft laws on the agenda, the parliament approved 19 bills during its morning session on Wednesday as it sent back two draft laws to the government, the National News Agency said.

Another draft law was referred to the Joint Parliamentary Committees.

“Most of the laws that have been approved by the parliament are related to international treaties and proposals between Lebanon and foreign parties,” NNA said.

Lawmakers who made interventions tackled demands related to their electorates as well as the protracting waste management crisis. Several MPs also tackled the issue of the electoral law.

MPs had started the session by observing a moment of silence, mourning MP Badr Wannous who passed away recently.

The Speaker later adjourned the meeting until 6:00 p.m.

Last week, Berri called for two general legislative sessions to be held on Wednesday and Thursday.

Where are the rest of the MPs?? 63 MPs missing, what are they being paid to do?!