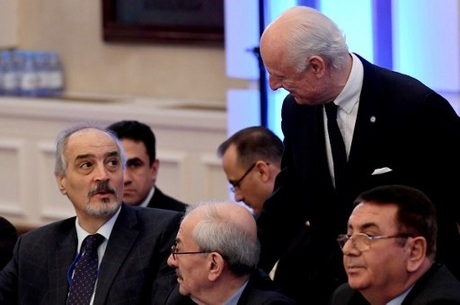 A first day of indirect peace talks between Syrian rebels and the regime of Bashar Assad in Kazakhstan's capital Astana ended Monday without any apparent breakthrough, sources told AFP.

"Our delegation's meetings are over for today," a source close to the regime told AFP, after rebel spokesman Yehya al-Aridi told reporters the opposition's meetings were also done for the day.

Monday's talks, organized by rebel backer Turkey and regime allies Russia and Iran, could have marked the first time armed rebel groups directly negotiate with Assad's regime since the conflict began in 2011.

But the rebels backed out of direct talks because of the regime's ongoing bombardment and attacks near Damascus.

The rebels, however, participated in indirect talks with the regime and held a three-way meeting with Russia, Turkey and the United Nations, an encounter Aridi described as "long and productive."

Aridi told reporters the "two sides are working on issues relating to the confirmation of the ceasefire" brokered last month by Ankara and Moscow.

He said that the rebel delegation had met with Russia -- which launched a bombing campaign in support of Assad in September 2015 -- and discussed "achieving a ceasefire in Syria".

The talks are scheduled to continue on Tuesday, with Aridi saying he expected they would take place "through mediation."

More than 310,000 people have been killed and more than half of Syria's population displaced since the start of the nearly six-year conflict.

The Butcher remains the greatest criminal of our time.

You call him butcher, the majority of humanity thanks him for his unbelievable achievements in destroying your evil headchoppers, hearteaters etc.

He is a butcher according to every credible human rights organization

He is a butcher according to every credible human rights organization

every credible? you mean the ones you deem to be credible, right?

I really hope they will keep fighting, and not surrender like they did in aleppo two days after vowing to fight till death. this time, we will want nothing less than their absolute and final annihilation.

Human Rights Watch and Amnesty International for a start

The real butchers are the Saudis and Qataris that keeps funding Wahabi groups to prolongue the war, you probaly made small donations yourself Arab.Ziocrat.

How well did your investment go?

The rebels vow to continue fighting? That would be the most welcome deal here please do.

Atleast our people can keep killing those Wahabis if the talks fails, so that is the good thing about that.

What a bunch of cowards refuses to negotiate face to face. Salafi scum

The Salafist zombies will have to take whatever offer the government gives them, or be destroyed. Beggars can't be choosers.

Whatever Russia decides. You still think that the Assad regime decides?!!!

The important thing is that he decides more than your Saudifist brethren.

lol SaudiSalafist.com now you're pretending to care about syrian sovereignty?

Mowaten Irani .... Far more than you care about the Syrian people

ArabDemocrat, your Gulf Saudis or Qataris aren't even there for the talks, so when did you get so high and mighty all of a sudden ya Saudi?