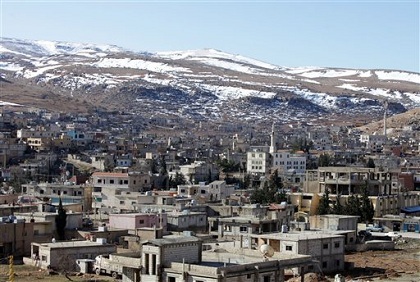 “Rockets and medium-caliber weapons are being used in the fighting in the al-Malahi and al-Ajram areas in Arsal's outskirts,” NNA said.

Deaths and injuries on both sides have been reported, the agency added.

Militants from the two groups are entrenched in Arsal's outskirts and in mountainous areas along the undemarcated Lebanese-Syrian border.

The Lebanese army regularly shells their posts while Hizbullah and the Syrian forces have engaged in clashes with them on the Syrian side of the border.

The two groups overran the town of Arsal in 2014 before being ousted by the army after days of deadly battles.

the ones slugging it out in arsal never claimed to be lebanese but the filth in brital do.

yet when the syrian army would hit those foreign terrorists in the outskirts of arsal you would cry that they are attacking lebanon... go fgure

How cute, so which faction in Lebanon isn't criminal?