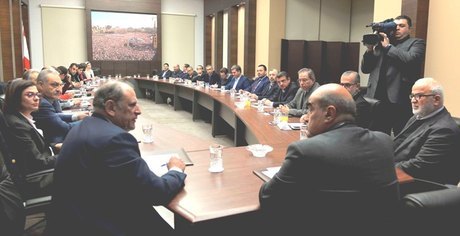 Al-Mustaqbal Movement on Friday called on President Michel Aoun to address Hizbullah chief Sayyed Hassan Nasrallah's latest verbal attacks against some Gulf countries, describing them as a “strong blow” to Aoun's efforts to mend ties with the Gulf.

“Through his attacks on the Kingdom of Saudi Arabia, the United Arab Emirates and the Kingdom of Bahrain, Hizbullah's secretary-general has dealt a strong blow to President Michel Aoun's efforts and to the visits that he intends to make to Kuwait and the UAE after he had visited Riyadh, Doha, Cairo and Amman,” Mustaqbal said in a statement.

“It is clear that Hizbullah is extremely annoyed by KSA and its role in defending Arab rights, and it is much clearer that it is annoyed by the kingdom and its wise leadership's embracement of the new presidential tenure and its recurrent attempts to reconcile between the Lebanese,” the movement added.

And noting that the president “is keen on the best relations with KSA,” Mustaqbal called on Aoun to “address Nasrallah's stances” which it described as an “insult to the oath of office” of the president.

Nasrallah had on Thursday accused Saudi forces of “oppressing and killing the Bahraini people” as he slammed Bahrain's government over its crackdown on Shiite-led dissent.

He also blasted Saudi Arabia and the UAE over their military campaign in Yemen against Iran-backed rebels.

This party called Al-Mustaqbal should be banned from politics. They've got to be the most hypocritical party ever. Aoun is consistent and you are not. He has been vocal in his support of Hezbollah and admitted he is part of Hezbollah's axis. You went ahead and voted him President and now you cry and whine.

Spare us your immature political behavior!

The GCC monarchies oppose civil rights for Arabs even worse than Israel does.

Iranian morality police beat and detain 14-year-old girl 'for wearing ripped jeans'
‘I still carry the bruises sustained from their beatings on my face ... my ribs still hurt’

so in the mind of a heretic follower of wilayat al faqih, the 14 year old victim who was tortured in Iran by the police for wearing ripped jeans is even further victimized by calling her insane!

122 killed in Bahrain - most by security forces. This is still a large number considering the small population. But you are right that what is happening in Syria is on a totally different scale.

according to nassrallah if Iran is deprived of its nuclear program he is willing to risk Lebanon's present and future and attack Israel's Ammonia plants and turn them into a nuclear bomb.