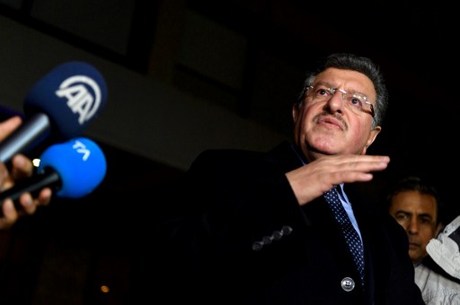 The main Syrian opposition group at peace talks in Geneva accused Damascus on Sunday of "stalling", after its chief envoy demanded all sides condemn the deadly suicide assault in Homs this weekend.

The High Negotiations Committee (HNC) made the charge after the Syrian regime's chief negotiator Bashar al-Jaafari said any opposition delegates who refused to condemn the attack were "accomplices of terrorism."

He said that in previous Geneva meetings, and now this one, "the only word that the regime knows is terrorism. In fact he is stalling by only mentioning this word and the fight against terrorism.

"Just as he is insisting on condemning the incident that happened yesterday, we also demand the regime delegation to tell everyone that they are committed to political transition," he added.

U.N. Syria envoy Staffan de Mistura launched the fourth round of Geneva talks on Thursday, but as in previous meetings there appears little prospect of the two sides meeting face-to-face.

The Syrian Observatory for Human Rights said in all 42 people were killed, but the provincial governor put the figure at 30 dead in the attacks claimed by former al-Qaida affiliate Fateh al-Sham Front.

The Syrian regime's delegation chief in Geneva vowed "retaliation" in response to the atrocity, and demanded all opposition delegates condemn it.

The Homs attacks came a day after 77 people, mostly civilians, were killed in a suicide bombing claimed by the Islamic State group in Al-Bab, said the Observatory. The jihadists were ousted from the northern town this week by Turkish-backed rebels.

This regime is appalling. They are not willing to transition to democracy because they know that they have too much blood on their hands and that the people will hold them accountable one way or another.

Which "Syrian opposition"? The "main" Syria opposition? Out of how many?

Give power to a thousand armed gangs who will continue fighting each other even if Bashar was sent to the moon. Great idea. Look at how well it went in Libya.

Minihabib ... The state is not Assad. The only way many countries South and Central America were stabilized was through power sharing arrangements. In Libya there was a total collapse of the instruments of state.

Yes, the state is not Assad, he is just a symbol for the fight against Wahhabism. As long as there is war, he is unlikely step down.

".... Bashar al-Jaafari said any opposition delegates who refused to condemn the attack were accomplices of terrorism:

since those so-called opposition delegates are terrorist sponsors, they accuse the Syrian govt representives of stalling instead of proving that they ceased to be so, partners of the terrorists, nevertheless their hands are stained with blood no matter what position thet take.

Slizern ... The regime is the biggest terrorist. So perhaps, we can all start by condemning the regime. And the attack on the factory of death and torture in Homs hardly qualifies as a terrorist act. The indiscriminate attacks by Russian and Regime airforces on civilian areas definitely qualifies as such