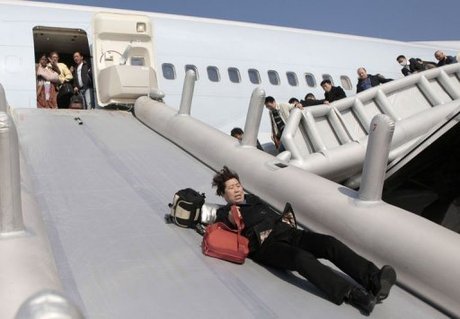 A Cathay Pacific plane aborted its take-off from a Shanghai airport Friday after smoke was detected in the cabin, forcing an evacuation of the aircraft and injuring nine, the airline said.

Cathay said 351 passengers and 19 crew were evacuated from the Boeing 747 aircraft, which was taxiing at the Chinese city's Pudong International Airport for a flight to Hong Kong when the incident occurred.

Seven passengers and two crew members received "minor" injuries in the accident and were being treated in hospital, Hong Kong-based Cathay said in a statement, but didn't specify how they were injured.

"Our preliminary information indicates that the captain ordered the aircraft evacuated because smoke was detected in the cabin prior to departure," the airline said.

Operations at the city's main international airport had returned to normal and the incident was under investigation, the Shanghai government said in a statement.

Cathay added that it had launched its own investigation and was co-operating with authorities.