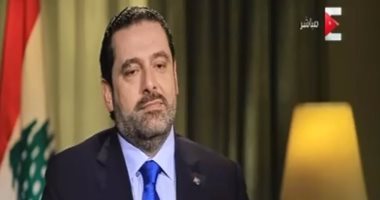 Prime Minister Saad Hariri announced Thursday that Lebanon is not headed for a crisis regarding the electoral law, while noting that Hizbullah's presence as an armed group is a “regional issue.”

“The atmosphere is positive and I believe that we are not headed for a crisis... I'm confident that we will reach an electoral law that represents all Lebanese,” Hariri told Lebanese reporters accompanying him to Egypt at the end of a two-day official visit.

Asked whether the large number of agreements that Lebanon has signed with Egypt during the visit were aimed at compensating for the decrease in cooperation with the Gulf countries, Hariri said: “No, not at all.”

“This (Egyptian-Lebanese Joint Higher) Committee had not convened for seven years... although it is supposed to convene every year. But this Committee did not convene and the governments of the two countries did not engage in any communication, that's why we believe that what we did will improve trade between Lebanon and Egypt,” the PM added.

Separately, Hariri told Egypt's ON E television that Lebanon should continue the discussion of a defense strategy aimed at countering Israel's threat, “because there is a dispute over this issue.”

He was answering a question about “Hizbullah's argument that the Lebanese army is incapable of defending Lebanon against Israel.”

“As for Hizbullah, I'm very frank: Hizbullah is a regional issue and not only a Lebanese one, that's why Israel should not blame Lebanon over this. Israel is addressing the Lebanese state whereas it is actually a regional issue,” Hariri added.

“The attempt to point the cannon at Lebanon is a wrong decision by Israel,” he went on to say.

Asked whether Hizbullah's presence in south Lebanon is to blame for Israel's hostility, Hariri said: “Israel has its interests and it has waged several wars, but all Arabs must resist Israel.”

Separately, Hariri said he does not agree to Hizbullah's argument that its military intervention in Syria has “protected Lebanon from terrorism.”

“When you implicate yourself in a conflict in Syria, you are bringing the scourge into your country. They should not have intervened, because this scourge came after their intervention. This is our viewpoint but their viewpoint is different,” Hariri added.

Mister Prime Minister, what does the so called Arabs and Gulf states actually do to resist Israel?
How about standing with the Resistance to strengthen Lebanon's unity and defence, instead of trying to cry to Israel about not blaming Lebanon?

It is embarrasing to see our Prime Minister, trying to make excuses to the Israeli enemy.

We do not need to have lectures from someone that supports the murder of the Syria people and support the no 1 threat against the Arab world.

The only ones that are a threat to Israel you mean.

Why does your so called Arab World not fight to free Palestine instead?

Let's be honest you don't care about lebanon and even less about it's unity and defence. Your loyalty is only to Hezbollah you follow them no matter what they say or do. You did a good job liberating the South in 2000 but back then you should have given your arms to the Lebanese Army. People like you say the Army is weak ? why is that? because you want them to stay weak!! Even if the Army get's strong enough to defend Lebanon you won't relinquish your arms. Those weeapons are a gurantee for Hezbollah to govern as the wish w bass. Balla mouqawama balla ballout !!

Hizb Ebola Virus is like a leech on the side of the LAF... sucking it and sapping it of power... Hizb Ebola Virus MUST Surrenders/Integrated under the Command and Control of the State!!! then and ONLY then! the LAF will come Alive... then the Resistance will be equally shared from the might of ALL Lebanese not just a Small percentage of the Shia Population... Yes I guarantee you MYSTIC if we were to have a vote of confidence from the Shia community about Hizb Ebola Virus they wouldn't garner 20-25% of the Shia Vote!!!
How dare anyone Sect have Full control of the State's defences, How dare you! we are reaching a pivot...
THUGS! you and Daash same Garbage (they from Saudi/Israel and you from Iran) go F... each other and Die!

Go and fight Israel yourself, no ones prevents you to do so, or else you are just a barking coward. We all wish you a pleasant and effective martyrdom.

Hariri is waffling on his anti-Israel position. He needs to affirm that Lebanon sanctions Hezbollah maintaining weapons and Hezbollah acts for Lebanon.

Hezbollah is the only threat that's facing the Lebanese people, when they attack Israel, we all know that Israel must retaliate, and who will bear the consequence? The Lebanese people, look Lebanon is not as strong as Egypt, Jordan, and the gulf states but can you imagine that all these Arab nations have made peace with Israel and today there's no threat in their border, they share Intel together and also business flourish, so why can't Lebanon defy all odds and take a bold step like others and make peace with their neighbor? There is more to archive when peace is restore than being at the state of war

Lol, Hezbollah is a bigger threat than the Salafists which are killing civilians and Lebanese soldiers left and right?