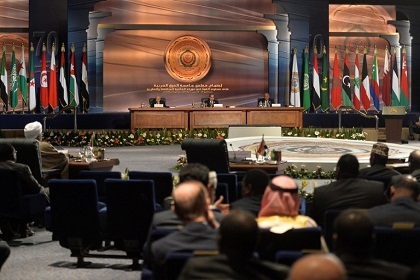 A new difficulty has surfaced on the eve of the Arab summit after reports said that five former presidents and premiers of Lebanon have sent a letter to head of the Arab summit including negative positions of Hizbullah -which was interpreted as bypassing Lebanon's position, al-Joumhouria daily reported on Tuesday.

Lebanon's participation in the summit is keen on highlighting the image and consistent position of the country during the new term of President Michel Aoun with PM Saad Hariri's participation. But what drew the attention was a message sent to the summit by five former presidents and prime ministers which perturbs Lebanon's stance during the summit, said the daily.

Credible sources told the newspaper on condition of anonymity that “ex-Presidents Amin Gemayel, Michel Suleiman and ex-PMs Fouad Saniora, Tammam Salam and Najib Miqati have sent a letter to the Arab summit.

“The three-page letter focused on five issues: Emphasizing the Taef Accord, emphasizing commitment to international resolutions particularly UN resolution 1701, illegal arms, the Baabda Declaration, the dissociation policy, spreading of the state authority and cessation of external involvements in the Syrian crisis.”

The five presidents sent copies of the letter to Aoun, Hariri and Speaker Nabih Berri who have all expressed annoyance with the step which Berri described as “unprecedented step and unacceptable,” said the daily.

Official sources told the daily: “The step is incomprehensible as for its content, meaning and purpose. It is also an insult to the position of the Presidency and an attempt to bypass Aoun especially that Lebanon will be represented by its president (at the summit).”

They remarked that the measure will only make Lebanon look divided against itself and weaken its position in front of the world's Arab leaders.

In spite of that, Lebanon still sees an opportunity ahead mainly after the Arab foreign ministers' meeting in Jordan on Monday “unanimously” approved a clause about “solidarity with Lebanon” that is expected to be included in the draft closing statement of the upcoming Arab Summit, it added.

The Arab foreign ministers met to prepare for the Arab League's annual summit, set for Wednesday in Jordan.

Ex-president Gemayel meanwhile told MTV in remarks broadcast in the evening that the letter aims to "strengthen the Lebanese position."

"Is it a crime to talk about the Baabda Declaration?" Gemayel wondered.

if the report is true, the govt and the presidency through its institutions, must investigate those stooges who are betraying thier own country and peolple... i guess that the Saudi money is flooding once again.

Southern........ do you believe in the government and its institutions? I mean like when you and your sectarian militia decided to go kill in Syria, Iraq, Bahrain and Yemen did you consult with the institutions that you are now asking to intervene?

the resistance is an institution, that obey the will of the majority of the people of Lebanon, the actual institutions of the current presidency support its role.

btw, the resistance didn't go but it was invited by the Syrian govt which represents the Syrian people, the decent Syrian people who are the majority.... its role there is to prevent the fall of the country under the terrorists control, thus Lebanon could have been the next.

@mohammad_ca, take it easy boy, and don't hurt yourself.

What Southern mean is no. We take our instructions form the Wilayat Al Faqih in Iran and care less about what the government says. The Hezb did not ask the government when it sent its troops to fight in Syria or when it invaded Beirut.

Why would I hurt myself if I pointed out innak inba3aset. The terrorist militia is not an institution because it does not follow the rule of law of the land. Nor is anyone in the terrorist militia elected by either popular vote or proxy. Plus the heat of the terrorist militia admitted that he gets his orders from vilayet e faqih in Iran and not from Lebanon. Try not to stab yourslef too hard next ashura as it is affecting your brain or whatever is left of it.

Sure as Southern says how dare they have an opinion about anything... they should be like obedient doggies... like hassan, who's only income is the never ending Iranian money.. they should do what they are told to do, no questions asked, no brain, know how, knowledge or independent thought needs to be involved in the making of any decisions.. here this is how it should be, the blueprint to life as it were

"the resistance is an institution".... of crime, sectarian hatred, drugs, theft, kidnappings, and illegal activities.

it is an institution for the shia iranians who live in Lebanon.