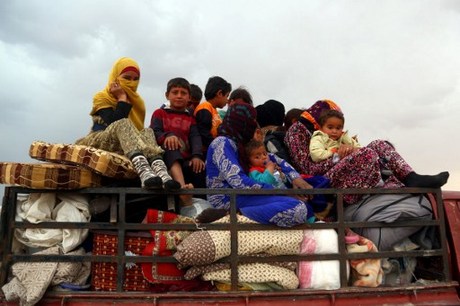 Hundreds of civilians fled their homes Thursday as fresh clashes erupted between Islamic State group jihadists and a Kurdish-Arab alliance near the town of Tabqa in northern Syria.

Women, children and men crossed through the village of Suwaidiya Saghira on tractors, pickups, motorbikes and donkeys to take shelter in areas seized by the U.S.-backed Syrian Democratic Forces (SDF) fighting to close in on the jihadists' Syrian bastion of Raqa.

Hundreds of civilians also fled Tabqa and nearby villages by boat, crossing to the north of the Euphrates River, said Rami Abdel Rahman, head of the Syrian Observatory for Human Rights monitoring group.

Dozens of the displaced took temporary shelter at a school in al-Mahmudli village, where the SDF searched the men and women in separate lines.

"We've fled bullets and blows. They made us hate life!" said 50-year-old Ahmad Ibrahim, referring to the jihadists.

"It's a miracle we've been able to escape," said Mussa Issa, 70, protesting that IS had threatened to burn down tents of displaced villages.