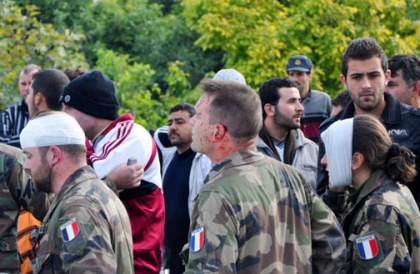 The bomb that targeted the French unit in the United Nations Interim Force in Lebanon on Friday was detonated a few moments before the soldiers arrived at the scene, reported the daily An Nahar on Sunday.

Security sources told the daily that casualties may have taken place had the bomb been detonated at the appropriate time, given the size and method in which it was detonated.

They explained that an error may have occurred and therefore the bomb exploded at the wrong time.

The explosives were placed in a garbage bin in the area of al-Nabaa on the road that leads to Burj al-Shamali in Tyre.

The blast left a one-meter deep crater and caused damages to nearby houses.

MTV on Saturday reported other security sources as saying that the bomb was remotely detonated with the assailant being located some 150 meters northwest of the blast site.

“The explosion took off a few meters before the French unit reached the bomb, meaning the attacker had committed a mistake in the detonation,” they explained.

Meanwhile, Prime Minister Najib Miqati said on Saturday that French Foreign Minister Alain Juppe’s statements that such attacks will not intimidate his country’s UNIFIL troops is a sign of France’s commitment to the international force.

Another explosion flop, this is now the new trade marks of the filthy militia