Shorter: We're Not Afraid of Terrorism, We're Proud to Invest in Lebanon Future 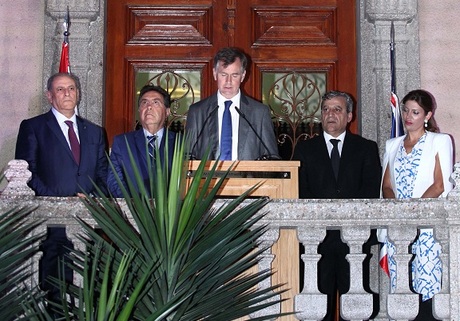 “Despite the dreadful terrorist attack in Manchester that targeted children and young people, it is in our nature to keep calm and carry on. Not to be cowed by terror. Because you Lebanese know something about resilience, your support means so much to us.” With those words, British Ambassador to Lebanon Hugo shorter addressed his guests to mark Queen Elizabeth II's 91st birthday and her Sapphire Jubilee -- 65 years on the throne.

A moment of silence was observed in honor of the victims.

Guests saw first-hand how scientific innovation and discoveries from the UK have contributed to the foundations of modern science and how they are helping build the future. Also showcased was how the UK is “matching its expertise with Lebanese potential to help build a better future for Lebanon,” a British Embassy statement said.

Addressing his guests, Ambassador Shorter said: “The theme of today’s Queen’s Birthday is ‘Investing in the future’. So it is poignant to come together this evening only 48 hours after the terrorist attack in Manchester, which targeted so many children and young people. But it is in our nature to keep calm and carry on. Not to be cowed by terror. To remember, to mourn, but to stay strong. Because you Lebanese know something about resilience. So your support means so much to us.”

“We are a partner for Lebanon’s future supporting Education which is the UK’s flagship program through formal and non-formal education; the knowledge economy supporting the UK-Lebanon Tech Hub and job creation offering support to small and medium enterprises through our INTAJ program and working with municipalities in response to community needs. We’re doing all this – and much more including as you know, in the security and defense sphere – because, fundamentally, we believe in Lebanon’s future,” Shorter added.

He noted that there will always be those who try to “stop progress, to ruin dreams and aspirations, as the cowardly attacks in Manchester have shown.”

“But the simple power of people striving for a better future, that is something no one can stop. Lebanon is blessed with resilient, talented and inspirational people. And that’s why I am proud that together, we are investing in a brighter future,” the ambassador went on to say.

Also present where Chevening scholars, recipients of UK Government scholarships who have studied in the UK and AUB graduate Antranik Sefilian, selected from 6,000 candidates for a Gates Scholarship to do a PhD on astrophysics at Cambridge University.