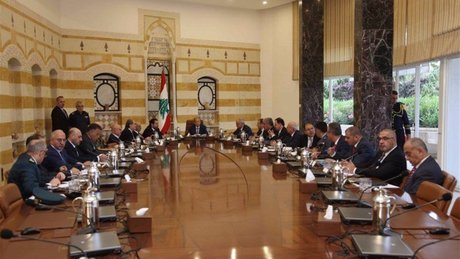 President Michel Aoun held talks with Prime Minister Saad Hariri Friday at the Baabda Palace ahead of a meeting for the country's Higher Defense Council.

"The president lauded the performance of the security agencies and the continuation of the military and security operations to deter terror and confront all its forms... amid the proliferation of terrorist movements across the globe," said a statement issued after the meeting.

"The council then discussed the readiness of the relevant security and administrative agencies on the occasion of the advent of the holy month of Ramadan and the summer season, in order to provide the needed stability for citizens, tourists and expats in all regions," it added.

"The council also discussed the number of military and security personnel who are needed to cover the requirements on the ground," the statement said.

"After deliberations, the council took the appropriate measures, gave directions and kept its resolutions confidential in line with the applicable laws," the statement added.

Earlier in the day, state-run National News Agency said the council was expected to discuss the security situations in the country and listen to reports from the security chiefs regarding the preparations for the holy month of Ramadan, which will begin Saturday.