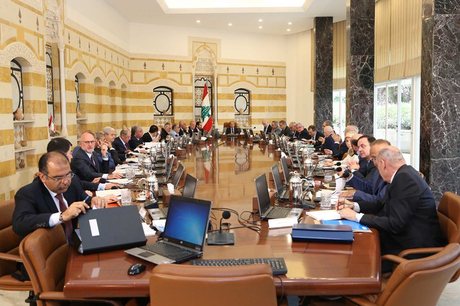 After marathon talks and an eleventh-hour agreement, the Cabinet on Wednesday approved a new electoral law based on proportional representation and 15 electoral districts, replacing the winner-takes-all system for the first time in the country's history.

The Cabinet also approved an 11-month technical extension of parliament's term until May 20, 2018, and stipulated that the elections should be held within the 60 days that precede the expiry of the legislature's term. Media reports said the elections will be held on May 6.

Ahead of the session, a committee was formed to “reformulate” the law format and fine-tune it.

Aoun congratulated the conferees at the beginning of the session on what he described as a “great achievement,” noting that “the majoritarian system (the 1960 law) did not secure just representation.”

“Cabinet will remain in session until it approves it,” he added.

For his part, Hariri stated that the “1960 law is behind us now and the extension we resort to is technical in order to hold modern, transparent and fair elections.”

After approval, the law was sent to Parliament for ratification, and Speaker Nabih Berri has scheduled a session for 2:00 pm Friday.

The agreement came days before the legislature's term was to end on June 20 — avoiding sending the country into a fresh political crisis.

Before the session began, Interior Minister Nouhad al-Mashnouq announced that he would request a one-year technical extension of parliament's term, explaining that preparing electronic cards for voters requires no less than seven months.

Industry Minister Hussein al-Hajj Hassan said: “The significance of the newly approved law is that it introduced a proportional representation system for the first time, although we would have favored that the (so-called) preferential vote be counted in the electoral district instead of the administrative district.”

For his part, Education Minister Marwan Hamadeh criticized the format saying “it takes us back to sectarianism instead of distancing it away.”

Aoun and Hariri had held a closed-door meeting before the cabinet convened and discussed the rest of the law details. They were joined later by Mashnouq.

The parties also agreed that any electoral list has to reach a certain threshold to become eligible to win seats. The threshold is determined by the so-called electoral quotient: the total number of voters in a certain district divided by the number of seats.

The so-called preferrential vote will meanwhile be counted in the administrative district and not in the electoral district, a demand that the Free Patriotic Movement had long called for.

An agreement was also reached on other technical details while no agreement was reached on the issues of “allowing the armed forces to vote, lowering the voting age and introducing a women's quota.”

The parties also agreed that expat voting will be introduced in the 2022 elections and that the diaspora will be granted six seats.