Yemen Cholera Toll Nears 1,000 as 'Humanity Loses Out to Politics' 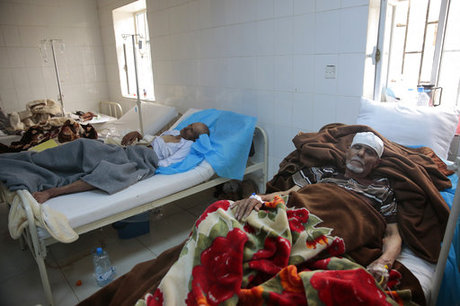 The death toll from a cholera outbreak is approaching 1,000 in Yemen, a war-devastated and impoverished country where "humanity is losing out to politics," a senior U.N. official said Thursday.

"Time is running out to save people who are being killed or being starved and now you have cholera as well adding to that complication," said Jamie McGoldrick, U.N. humanitarian coordinator in Yemen.

"We are struggling because of the lack of resources. We need some action immediately," he said at a press briefing in the Jordanian capital.

McGoldrick gave updated figures of more than 130,000 suspected cases of cholera and over 970 deaths, with women and children accounting for half of the numbers.

"What is heartbreaking in Yemen is that humanity is losing out to the politics," said McGoldrick.

He said a $2.1 billion humanitarian response plan for Yemen for 2017 had only been 29 percent funded.

The cholera outbreak on top of famine in Yemen was "an indication to how things are falling apart with only 50 percent of health services" operational.

Donors in April pledged close to $1.1 billion in aid to Yemen, which the U.N. Office for the Coordination of Humanitarian Affairs calls the "largest humanitarian crisis in the world."

But only 25 percent of aid pledged to the U.N. refugee agency has been delivered so far, UNHCR's Yemen spokesperson Shabia Mantoo said Wednesday.

Yemen's war has seen more than 8,000 people killed and millions displaced since a Saudi-led Arab coalition intervened in March 2015 to support the government against Shiite Huthi rebels allied with Iran.

but the shia huthis and iran have all the weapons in the world to keep fighting while the Yemeni people die in their thousands.

Just like the Salafi "rebels" in Syria, whose kids are dying of "Aleppo boils".

I respect Mr. Mega Habib for his very infrequent posts