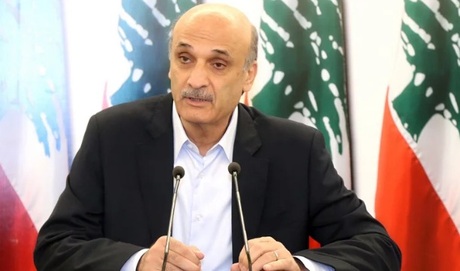 Lebanese Forces leader Samir Geagea noted Friday that Syrian refugees in Lebanon will not accept to return to their country through agreements coordinated with the Syrian government.

“The circumstances in Syria have become suitable for their return and the decision in this regard is a sovereign Lebanese decision par excellence,” Geagea said during a Maarab ceremony to announce the candidacy of Ajjaj Haddad for the Sidon-Jezzine Greek Catholic parliamentary seat.

“We must know the right way to return them based on the method that was applied by Turkey and Jordan,” Geagea added.

The LF leader however noted that “when the refugees realize that their return is conditioned on coordination with Bashar al-Assad's regime, they won't return, because Bashar al-Assad himself was behind their displacement.”

President Michel Aoun had on Thursday underscored in his maiden speech before the U.N. General Assembly that Lebanon will not allow the naturalization of any Syrian or Palestinian refugee on its soil “no matter what that might cost.”

Noting that the Syrian state is now in control of “85 percent of its territory,” the president emphasized that “there is an urgent need to organize the return of refugees to their country.”

Separately, Geagea reassured that the parliamentary elections will be held on time.

“We will hold parliamentary polls after seven months, although there are mouthpieces that have started to promote the claim that there will be no elections,” he said.

“We tell them that the elections will definitely be held and that they will decisive and crucial – with or without a magnetic voting card and with or without pre-registration – becaue the people cannot wait any longer,” Geagea went on to say.

crucial? Keep fooling people. Nobody buys your BS anymore. You are an accomplice to all the corruption, theft, and chaos that exist in Lebanon by being part of the ruling class.

What will elections do? Even if you get all the Christian votes which is improbable what will that change in the face of hezbollah? Nothing.

You agreed to proportional representation which will ensure Hezbollah and its cronies will win the elections and have parliamentary majority. The law will not be changed without a civil war.

Well done... you and Hariri are both sellouts.