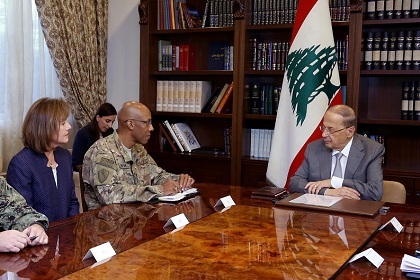 Deputy Commander of United States Central Command Lieutenant General Charles Brown has stressed that the army should be “the sole defender of Lebanon" during a visit to Lebanon this week, the U.S. Embassy said.

During his visit, Brown met with President Michel Aoun, Prime Minister Saad Hariri, Defense Minister Yaacoub al-Sarraf and Army Commander General Joseph Aoun to "reaffirm the U.S. government’s commitment to the Lebanese-American partnership and support the Lebanese Armed Forces in their capacity as the sole defender of Lebanon," the Embassy said in a statement.

Brown also met with the UNIFIL Head of Mission and Force Commander Major-General Michael Beary at UNIFIL Headquarter in Naqoura.

He received "an update on the implementation of UNIFIL’s vital mission that has helped de-escalate tensions in southern Lebanon," the Embassy said.

lulz @ Army Must be 'Sole Defender of Lebanon'

The American General is talking to a Caporal who run away and came back to become the Khadim of Ebola....