Tillerson Heads Back to Deal with Gulf Crisis 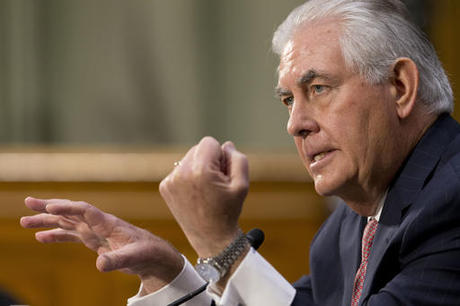 The United States will again try to resolve a Gulf crisis that Washington has alternatively fueled or tried to soothe, as Secretary of State Rex Tillerson heads back to the region.

The top US diplomat did not himself hold out much hope of an immediate breakthrough in the stand-off between Qatar and Saudi Arabia, but the trip may clarify the issues at stake.

"I do not have a lot of expectations for it being resolved anytime soon," Tillerson admitted on Thursday, in an interview with the Bloomberg news agency.

"There seems to be a real unwillingness on the part of some of the parties to want to engage."

Nevertheless, President Donald Trump's chief envoy is to leave Washington this weekend for Saudi Arabia and from there head on to Qatar, to talk through a breakdown in ties.

Trump, having initially exacerbated the split by siding with Riyadh and denouncing Qatar for supporting terrorism at a "high level," has predicted the conflict will be resolved.

Tillerson, a former chief executive of energy giant ExxonMobil, knows the region well, having dealt with its royal rulers while negotiating oil and gas deals.

But the latest diplomatic spat is a tricky one, pitching US allies against one another even as Washington is trying to coordinate opposition to Iran and to Islamist violence.

- Major air base -Saudi Arabia, Bahrain, the United Arab Emirates and Egypt cut diplomatic relations with Qatar in June, accusing it of supporting terrorism and cozying up to Iran.

The sides have been at an impasse since then, despite efforts by Kuwait -- and a previous unsuccessful trip by Tillerson in July -- to mediate the crisis.

The blockade has had an impact on Qatar's gas-rich economy, and created a new rift in an already unstable Middle East, with Turkey siding with Qatar and Egypt with the Gulf.

Iran, Washington's foe, only stands to benefit from a split in the otherwise pro-Western camp, and US military leaders are quietly concerned about the long-term effects.

Trump, after initially vocally support the effort to isolate Qatar despite its role as a military ally and host of a major US airbase, has not called for a negotiated resolution.

Tillerson says there has been little movement.

"It's up to the leadership of the quartet when they want to engage with Qatar because Qatar has been very clear -- they're ready to engage," he said.

"Our role is to try to ensure lines of communication are as open as we can help them be, that messages not be misunderstood," he said.

"We're ready to play any role we can to bring them together but at this point it really is now up to the leadership of those countries."

Simon Henderson, a veteran of the region now at the Washington Institute of Near East Policy, said the parties may humor US mediate but won't want to lose face to each other.

"Tillerson will say: 'Come on kids, grow up and wind down your absurd demands. And let's work on a compromise on your basic differences'," he said.

Riyadh's demands of Qatar are not entirely clear, but it has demanded Qatar cool its ties with Iran, end militant financing and rein in Doha-based Arabic media like Al-Jazeera.

"I haven't seen Qatar make any concession at all other than to say negotiation is the way out of this," Henderson said.

"The problem is that people, mainly the Saudis and the Emiratis, don't want to loose face. It needs America to step in, but to save face, they should try to make this a Gulf-mediated enterprise with American support."

Kuwait has tried to serve at a mediator, with US support, but the parties have yet to sit down face-to-face.

After his visit to Riyadh and Doha, Tillerson is to fly on to New Delhi in order to build what he said in a speech this week could be a 100-year "strategic partnership" with India.

Tillerson will stop in Islamabad to try to sooth Pakistani fears about this Indian outreach, but also pressure the government to crack down harder on Islamist militant groups.