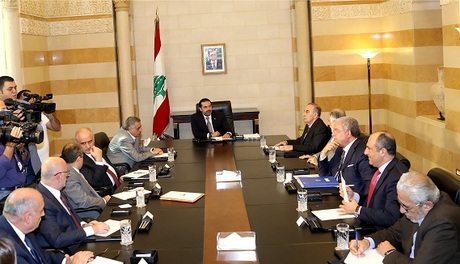 “Three forces are obstructing the electoral law: the one who is impeding the organization of the elections, or the interior minister, those who are accusing us of corruption, theft and shady deals over the issue of voting cards, and those who are demanding the pre-registration of voters,” Bassil said after the ministerial committee's meeting at the Grand Serail.

Bassil said calls for the pre-registration of voters who wish to cast ballots in their places of residency are “targeted against the freedom of these voters.”

Mashnouq had announced before the meeting that “the pre-registration of voters has become inevitable.”

Minister of the Displaced Talal Arslan meanwhile lamented that there is an “acute political dispute” over the electoral mechanisms, noting that the panel has not achieved any progress.

Finance Minister Ali Hassan Khalil for his part said that the only point that the parties have agreed on is that the elections “will be held on time.”

The polls will be held under a complex proportional representation law for the first time in Lebanon's history.

and a s usual the demagogue bassil makes the accusations with no proof but it is good for his populist stances as elections near.

I am sure even his father in law knows that Bassil is a bumbling idiot.

Bassil wants to give the contract for making the biometric IDs to his friend without competitive bidding. He is the absolute definition of filth and corruption. Listen to what the Lebanese Forces Charles Jabbour said this morning.