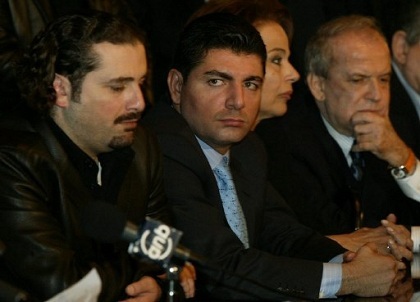 In a statement from Bahaa Hariri's office sent to The Associated Press, he accused Hizbullah of seeking "to take control of Lebanon." He also expressed gratitude to Saudi Arabia for "decades of support" for Lebanon's national institutions.

Bahaa Hariri's name has been mentioned in Lebanese media reports as a possible Saudi-backed candidate to replace his brother, who announced his resignation from the Saudi capital on Nov. 4.

In a follow-up phone call from Monaco with the AP Wednesday, Bahaa Hariri declined to comment further.

Saad Hariri, who headed a year-old coalition government that included Hizbullah, cited Iran and Hizbullah's meddling in the region for his decision to step down. He has not returned to Lebanon since, and the Lebanese president has refused to accept his resignation before he returns to the country to explain the circumstances of his decision.

Top Lebanese officials believe Saudi Arabia forced the resignation on Hariri, a dual Lebanese-Saudi national, and is holding him in the kingdom against his will.

"I support my brother Saad's decision to resign as prime minister of Lebanon in the face of the growing demands and actions of Hizbullah, Iran's surrogate party, in Lebanon," the statement by Bahaa Hariri said.

It said the Hariri family has always stood for the principles that make Lebanon unique in the world, including its mosaic of different confessions and political backgrounds.

"Only a pernicious outside actor, such as Iran and its surrogate, Hizbullah, can upset the balance as this group now seeks to take control of Lebanon," the statement added.

Lebanese media reported last week that the kingdom had decided to replace Hariri, whom it has come to perceive as too lenient with Hizbullah, with his older brother as its new man in Lebanon.

Interior Minister Nouhad al-Mashnouq, a member of Hariri's al-Mustaqbal Movement and a close aide, dismissed the reports. "We are not a herd of sheep or a piece of property whose ownership can be handed over from one person to the other," he told reporters.

Bahaa Hariri, 51, worked in his family's construction and development company, Saudi Oger, in Saudi Arabia. He then split, and now runs his own real estate and investment businesses. He rarely makes comments to the press.

In April 2005, two months after their father, former Prime Minister Rafik Hariri, was assassinated in a Beirut bombing, the family announced that Saad would assume his father's political mantle, skipping over his brother, Bahaa, who is several years his senior.

The relationship between the two Hariri brothers is reportedly tense.

In a phone call with the AP Wednesday, Bahaa Hariri declined to comment further.