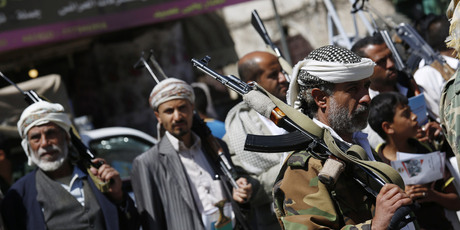 Yemeni rebels who seized full control of the capital Sanaa over the past week have detained more than 40 media staff, press watchdogs said on Wednesday, demanding their immediate release.

They include staff of Yemen Today -- a television channel affiliated with former president Ali Abdullah Saleh, whom the Huthi rebels killed on Monday as he fled the capital following the collapse of their uneasy three-year alliance, the watchdogs said.

The rebels overran the television's Sanaa offices on Saturday after attacking it with rocket-propelled grenades and wounding three guards, Reporters Without Borders (RSF) said.

"This hostage-taking is typical of the climate of hostility in Yemen towards journalists, who are often targeted in this conflict," said RSF's Alexandra El Khazen.

A spokesman for the Committee to Protect Journalists called for the immediate release of the journalists, saying the Huthi attack on Yemen Today "shows a profound contempt for press freedom".

Saleh, who ruled Yemen for three decades, had joined forces with the Huthis in 2014 when they took control of large parts of the country, including the capital.

But that alliance unravelled over the past week as the former leader reached out to the Saudi-led coalition that has waged an air campaign against the Huthis since March 2015.

A least 234 people were killed in fighting that the International Committee of the Red Cross described as the fiercest since the start of the conflict.

An official of Saleh's General People's Congress (GPC) said some of the detained staff had since been transferred to prison while others were still being held in the television's offices.

"The Huthis were exerting pressure on them to change their coverage, to issue certain statements and report the betrayal of former president Saleh and accuse him of working for the Arab coalition.

"But the journalists refused to do it," the official said.

Addressing a mass rally in Sanaa on Tuesday, the head of the rebels' revolutionary council, Mohammed Ali al-Huthi, said they had been left with no choice but to "confront" their former ally but were now "ensuring the safety" of his supporters.

"They are being treated in hospitals and no one is looking to eliminate them," Huthi said.

But Yemen's Sanaa-based national syndicate of journalists said the Huthis were posting the names of employees of media they regarded as hostile at checkpoints around the capital and demanded "an end to abuses".