Venezuelan Leader Says No to Opposition in Presidential Race 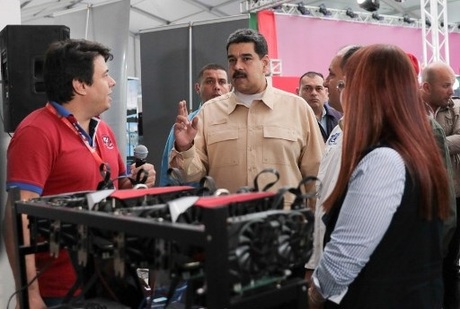 Venezuela's President Nicolas Maduro announced Sunday that leading opposition parties will be barred from taking part in next year's presidential vote after they boycotted mayoral polls, in a move set to further consolidate his grip on power.

That includes the groups of key figures who have led street protests against his rule such as Henrique Capriles, Leopoldo Lopez and others, Maduro told reporters after casting his vote in the municipal polls.

"That's what the National Constituent Assembly set out," he said, referring to a controversial Maduro-allied special powers legislature whose legitimacy has been questioned by many in the international community.

"If they don't want elections, what are they doing? What's the alternative? (Civil) war?" the president asked, visibly angry.

While municipal elections were under way across the country, Maduro clearly had his mind on the 2018 presidential race, in which he plans to seek reelection despite an approval rating of around 30 percent.

Crisis-weary voters meanwhile appeared to be staying away in droves from mayoral elections that the opposition is already boycotting.

Maduro said his party won more than 300 of Venezuela's 355 mayoral races. And the president insisted that 9.3 million people voted, which he called a record for a municipal vote.

Yet a failure in municipal votes could be seen by many a sign the government had lost the support of the massive lower-income base it relies on to stay in power and in charge of the state-led economy.

Luis Emilio Rondon, a member of the electoral board, said that there were some irregularities involving pro-government candidates who are running some polling stations. He did not immediately say where, or address the extent of the issue.

He also said he had received reports that in some polling stations run by the ruling PSUV, officials were making sure that those who have a special social benefits card get out to cast their votes.

He said some of these voters' "Fatherland Card," an electronic card that helps them get scarce food and medicine, were being scanned.

"There has been some confusion on voters' part about whether they have to go to the polls with their regular ID card and the Fatherland Card. This is not needed to vote. You only need your regular national ID," he stressed.

These are the last elections before presidential voting scheduled for late next year, in which Maduro says he will seek another term. Some analysts think they will be moved up to the early months of 2018.

The lack of a serious challenge Sunday to Maduro-aligned candidates led to skepticism in the main cities of Caracas, Maracaibo and San Cristobal.

Maduro's ruling socialist party was aided by the refusal of the three main parties in the opposition coalition Democratic Union Roundtable (MUD) to participate, though smaller parties decided to contest the election.

Victor Torres, a chauffeur in Maracaibo, said the election will do nothing to resolve what he considers to be the country's biggest woe: hyperinflation, estimated at 2,000 percent this year.

"The other day I went to buy a banana. In the morning it cost 1,900 bolivares and in the afternoon, 3,000. You can't live this way. I am disappointed with politicians," said Torres.

Yon Goicoechea was contesting the election against the wishes of his party because he says the opposition must "defend" its political space.

Goicoechea, who is running for mayor in a Caracas municipality, said the government "will try to steal the vote, but we will not give it away."

The balloting station where the president himself votes, in a poor area of Caracas called Catia, also looked deserted, an AFP reporter there said.

"Not voting is a mistake. Instead of moving forward, we are going backwards the way crabs do," said Carmen Leon, 78, after casting her ballot in Chacao, which has been home to many opposition leaders.