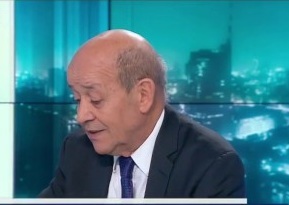 French Foreign Minister Jean-Yves Le Drian on Tuesday hit out at Iran, accusing the Islamic Republic of trying to carve out an "axis" of influence stretching through Syria to the Mediterranean Sea.

Speaking about the role of Russia and Iran in helping Syrian President Bashar al-Assad regain the upper hand in the civil war, Le Drian said: "Russia supplies aviation and support on the ground but Iran supplies its militia and supports Hizbullah."

On Monday, President Vladimir Putin ordered the partial withdrawal of Russian troops from the war-torn country, saying their task had been largely completed.

In a France 2 television progam on Syria to air Tuesday evening Le Drian was particularly critical of Iran, which is vying for regional supremacy with Saudi Arabia.

"Iran's presence (in Syria) and Iran's desire to create an axis from the Mediterranean to Tehran: No!" Le Drian declared, insisting that any deal on Syria's future needed to ensure it remained "independent from the pressure and presence of other countries."

This is not the first time Le Drian has expressed concern over Iran's intervention in conflicts. Tehran and Riyadh support opposing camps in Syria and Yemen's wars and are also accused of pulling strings in Lebanon.

In remarks following a visit to Saudi Arabia by French President Emmanuel Macron in November, Le Drian accused Iran of having "hegemonic" intentions in the region.

A furious Iran accused France of having a "biased and partisan approach to the crises in the region," alleging the stance was "contributing to turning potential crises into real ones."

Macron has announced plans to visit Iran in 2018.

Hey Mr. Le Drian. If you've started to have wet dreams, be reassured that you are to old for that. The world is changing now. France has no say in the Middle East.

Neither does Iran. By the way what Christian family name did you steal Movaten?

Still is younger than the Ayatollah.