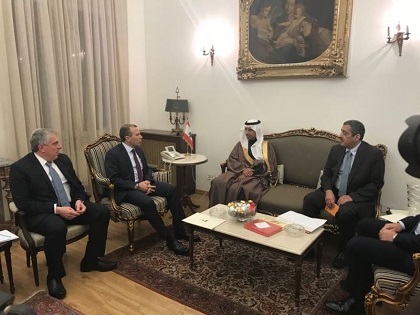 Foreign Minister Jebran Bassil held talks with the Saudi ambassador to Lebanon Walid al-Yaacoub on Monday, one day after remarks urging diplomats “not to interfere in Lebanon's politics or parliamentary elections,” the National News Agency reported.

Bassil, who met Yaacoub at his office in the foreign ministry, received an invitation to a meeting of the the Organization of Islamic Cooperation to be held in Saudi Arabia, said NNA.

On Sunday, the Free Patriotic Movement chief, Bassil, warned of "foreign attempts" to meddle in the upcoming parliamentary elections.

"I warn against the interference of foreign forces in our affairs and I caution all those who work in the diplomatic field to know their limits and abide by diplomatic norms and international conventions," Bassil had said.

Last week, Yaacoub presented his credentials to President Michel Aoun. The step followed a political row between Saudi Arabia and Lebanon against the backdrop of Prime Minister Saad Hariri's resignation, which he eventually revoked.

The resignation was widely blamed on SA.