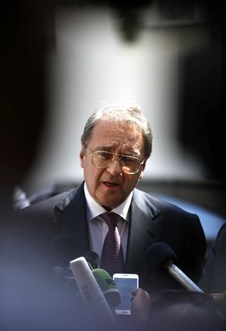 In a demonstration of support for the Lebanese army and security agencies, Russia has announced at the Rome II Conference that it will provide “part of military products to Lebanon at no charge,” emphasizing the necessity to boost the army's combat abilities, al-Joumhouria daily reported on Saturday.

“Moscow considers essential the contribution to strengthening the combat capabilities of the Lebanese army and internal security forces, which are responsible for the security and stability of the country,” Russian special envoy to the Middle East and Africa, Deputy Foreign Minister Mikhail Bogdanov said at the conference.

“Given the limited financial capacity of the Lebanese side, as a result of unfavorable regional economic conditions and unprecedented influx of Syrian refugees, the decision to supply part of the military products within the framework of the military-technical relations was made free of charge,” he added.

On Thursday, Lebanon received increased military support from the international community with France opening a 400 million euro ($492 million) line of credit to the country's army.

Rome II, an international conference held in Rome to drum up money to bolster the armed forces of the country.

how many used AK47s?

90% of the army's nearly $2 billion budget goes on salaries, benefits, housing, free medical and education grants. The army has enough funds to invest in real estate and purchase hotels but never seems to have money to purchase weapons.

Nearly all of the army's weapons are grants from other nations.