'Most are Poor': Armenians Struggle with Low Wages, Huge Corruption 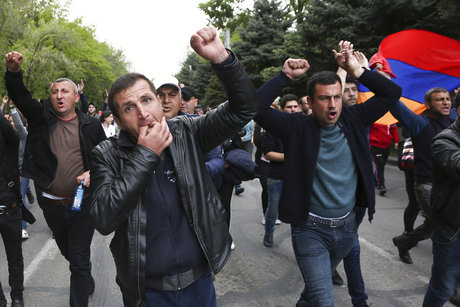 "For ten years, Sarkisian promised us a good life," said 41-year-old Anait Galstyan, while tending to her market stall in the Armenian capital Yerevan, mulling over the reasons why people took to the streets to force veteran leader Serzh Sarkisian to resign.

"But he did nothing with his promises," she adds, reflecting the ex-Soviet country's widespread disillusionment with their former leader.

Anger towards Sarkisian, who was controversially made prime minister after serving 10 years as president, fueled the mass street protests that ultimately saw him step down.

Demonstrators were outraged by a political transition that they compared to the maneuvers of Russia's leader Vladimir Putin, who also switched between the roles of prime minister and president.

But frustration over the country's sluggish economy, entrenched poverty and deep corruption also played a part in the downfall of its most powerful politician.

"When my mother died, we sold the last valuable thing in our home, my wife's bracelet, in order to get money for the funeral."

Poverty levels in Armenia have risen by 2 percent since 2008 -- when Sarkisian first came to power -- and have reached about 30 percent, according to the World Bank. Unemployment was at around 18 percent in 2017.

"There is no middle class. Most people are poor... wages are pitiful" said Ruzanna Simonyan, a 29-year-old psychologist walking with her child in the central Republic Square.

"Unfortunately, there was no possibility of changing the government in elections. So people were forced to take to the streets," she adds.

Simonyan, like many Armenians, believes the widespread poverty is a result of the economy being largely controlled by a handful of powerful oligarchs. Many also associate Sarkisian's rule with massive corruption, especially in the police and judiciary.

- 'The corruption is mind-boggling' -

"There is corruption everywhere, at every level in this country. If I want to fill up the tank in my car, I need to pay a bribe at the petrol station," said a 60-year-old taxi driver who only gave his first name, Gurgen.

"The corruption is mind-boggling. Nothing can be done without a bribe. Corruption is everywhere. In schools, in universities and -- most of all -- in the police and courts," said Julietta Karapetyan, a 58-year-old unemployed woman.

She says she has faith in opposition MP Nikol Pashinyan, who led the protests, but is worried he could strike a deal with Sarkisian's powerful Republican Party and prevent real change from taking place.

"We need a leader like Saakashvili to wipe out corruption," she said, referring to neighboring Georgia's controversial ex-president Mikheil Saakashvili, who cracked down on once rampant bribery in the Black Sea country but has been accused by opponents of authoritarianism.

"He is the only one in the post-Soviet space who has been able to so," she added.

The opposition is pushing for a peaceful transfer of power and has called for snap elections, but the political situation remains in flux.

Despite the uncertainties, the anti-government protests seem to have inspired some of the Armenian diaspora to return.

Zhanna Dzhavaryan, a 72-year-old retired economist who left Yerevan for Moscow as a child, was visiting Armenia during the demonstrations.

"I've lived in Russia all my life. Now I'm thinking of moving back to Armenia. We saw that, unlike in Russia, Armenians decide the future for themselves," she said.