Syria Rebels Hand over Arms in New Deal with Regime 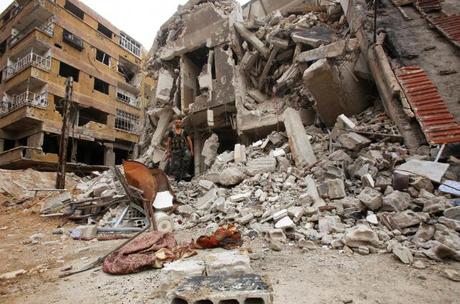 Syrian rebels on Friday were surrendering their heavy weapons after reaching a new deal with the government for a central swathe of territory, a war monitor said.

Opposition fighters agreed with regime forces and their allies to a ceasefire deal earlier this week for parts of Syria's central provinces of Hama and Homs, including the rebel towns of Talbisseh, Rastan, and Al-Houla.

"The fighters are handing over their heavy and intermediate weapons to Russian and regime forces for the second consecutive day," said the Syrian Observatory for Human Rights monitoring group said.

It included artillery and machine guns, said Rami Abdel Rahman, the head of the Britain-based Observatory.

"Once the handovers are finished, the rebels who want to leave will be evacuated out with civilians," Abdel Rahman told AFP.

Rebels and civilians will be granted safe passage to the rebel-held town of Jarabulus, in Aleppo province, and the neighbouring province of Idlib which largely escapes government control, according to state news agency SANA.

It said the deal also provided for the return of government institutions to the three towns and the reopening of a key highway.

That highway runs from the capital Damascus, through Homs, and onto second city Aleppo, in the north. Securing it has been a major target for the regime's military operations.

The area in Homs was part of a "de-escalation zone" agreed one year ago by opposition supporter Turkey and regime allies Iran and Russia.

The four zones initially saw a reduction in shelling but violence has since escalated.

One of them, Eastern Ghouta, was recaptured last month by the Syrian government after a blistering two-month offensive that ended in forced evacuations of rebels and civilians there.

Jaish al-Izza, one rebel faction present in the Homs zone, has said it rejects the agreement and pledged to remain deployed on its front lines.

The agreement comes after several days of intermittent clashes and regime reinforcements to the area.

It is the third such transfer deal for Homs province, after thousands were bussed out in a pair of agreements for the city itself.

Such negotiated withdrawals have brought swathes of territory back under government control during the country's seven-year war, most recently near Damascus.

Another evacuation deal was underway on Friday in rebel-held areas south of the capital.

SANA reported buses were entering the towns of Yalda, Babila, and Beit Saham to take opposition fighters and civilians north to rebel territory.

It was the second day of transfers for the towns. Around 1,650 people, including rebels and civilians, were bussed out on Thursday and reached northern Syria the following morning, according to the Observatory.