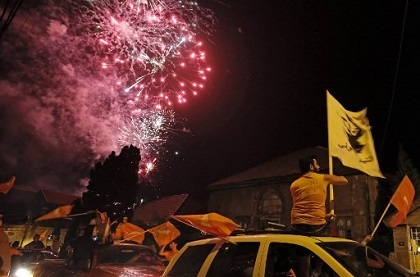 Hizbullah was poised to seal a win in Lebanon Monday with results for the decade's first general election expected to confirm the Iran-backed party as the main winner.

The polls were also marked by a low turnout of 49.2 percent and the emergence of a civil society movement challenging Lebanon's oligarchs that could clinch a pair of seats in parliament.

Lebanon's sectarian-based power-sharing politics mean no single alliance in the 128-seat parliament will enjoy a stable majority and analysts expect a fragile status quo to be preserved.

Interior Minister Nouhad al-Mashnouq announced the turnout figure at a news conference shortly after midnight and appeared to blame it on the new electoral law agreed last year.

"This is a new law and voters were not familiar with it, nor were the heads of polling stations," he said. "Voting operations were very slow."

As provisional estimates trickled in, some candidates' supporters started celebrating in the streets after a polling operation marred only by a few violations but no major incident.

Lawmakers had extended their own mandate three times since 2009, ostensibly over security concerns linked to neighbouring Syria's war and political divisions that led to long and crippling institutional crises.

A higher turnout had been expected after the long electoral hiatus but the vote was the first to follow a law passed in 2017 and the pre-printed ballots used Sunday appeared to confuse some voters.

Some voters also said that the sometimes absurd web of local electioneering alliances that saw some parties work together in one district and compete in others had put them off.

With an hour to go before polling stations closed, several senior political leaders appealed for an eleventh-hour rush to the ballot boxes but stopped short of extending polling hours.

Experts differ on who would benefit the most from a low turnout as alliance scenarios varied across the country's 15 districts, whose size and sectarian fabric are all different.

Hizbullah's own estimates a few hours after counting started sees the Shiite movement coming out on top everywhere it fielded candidates, although only official results expected early Monday will confirm the vote's outcome.

With an increased number of seats in parliament, Hizbullah is expected with its allies to build a majority in its favor more easily on key issues such as the sensitive matter of the weapons it never laid down after the 1975-1990 civil war.

The leading voice calling for the Tehran-funded movement to give up an arsenal that has now grown to outgun the national army has been Prime Minister Saad Hariri.

Pollsters expect Hariri's Sunni-dominated al-Mustaqbal Movement to be among the biggest losers of the election but say he could keep his job.

The new contours of parliament could leave the Christian party of President Michel Aoun, who has allied with Hizbullah and Future, in the position of kingmaker.

"The biggest swing vote will be President Aoun's group, which will move among the other blocs. Hizbullah will benefit from the lack of a broad coalition against it," political analyst Imad Salamey said.

Hizbullah, which was created in the 1980s to fight against Israel and currently battles in Syria alongside regime forces, is listed as a terror organisation by the United States.

Members of the Shiite group were suspected in the 2005 assassination of Hariri's father Rafik, himself a former and charismatic prime minister.

Lebanon has often been a scene where the rivalry between the region's two heavyweights has played out, but their political clients in this election seemed content to maintain the status quo.

Despite the disappointing turnout among an electorate that included around 800,000 people who were too young to vote in the previous general polls, the new electoral law that allows smaller parties to run helped a civil society list break into parliament.

Two women, television journalist Paula Yacoubian and author Joumana Haddad, looked poised to secure a seat from which they have pledged to challenge political dynasties they condemn as corrupt.

Alexandre Salha, a 30-year volunteer with the "Kulluna Watani" civil society list, gathered with other supporters in a Beirut cafe after the vote and said the most important thing was to get a foot in the door.

"We look forward to 2022 and we really believe that change has started. If we get one or two today, hopefully we'll have 10 in four years. We made hope possible," he said.

The election law was specifically tailored to weaken other parties and give hezbollah and its allies a sizable portion of Parliament. It was by design and not coincidence.

Both Hariri and Geagea happily signed on.

this is what your cousins the Saudis and your brothers in law the Israelis wish, but it will remain as such, a wish... keep whining

The electoral law was devised to weaken Mustaqbal specifically. Mustaqbal is the biggest loser in all of this. Geagea was happy to endorse the law because it would give him a bigger block in parliament. They all sold their principles for personal gains. One to become a prime minister and the other to have a bigger block.

Hezbollah did not gain seats but its allies did at the expense of mustaqbal. The results were so predictable and many of us wrote about this same issue months ago.

I am glad Future were hammered, cause they are weak and quickly fold their positions. The only way to break this dysfunctional system is to go to the One man One Vote system and winner takes all. Nothing else will work.

When Israel was occupying the South of Lebanon, all of Lebanon was united against the occupation. But now that Iran is occupying Lebanon, suddenly there are collaborators who are cheering the occupation? If it's just a difference of who you are a slave to, then why the hell have a country in the first place?