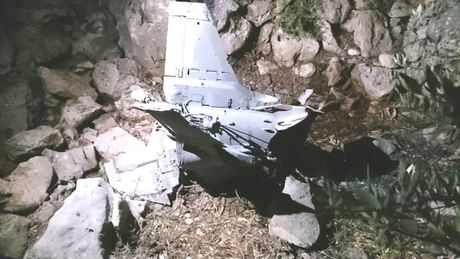 “Between 3:00 and 3:45 am, and as a result of the incidents that took place in Syria, remnants and tails of missiles of unidentified types and sources landed in the outskirt of the Hasbaya town of al-Hibbariyeh, the Shebaa town of Saqiyat Wadi Janaam, and Khirbet Qanafar and Qab Elias” in the Bekaa, a Lebanese Army statement said.

“The debris did not cause any casualties and army patrols headed to the outskirts of the aforementioned towns, where military experts examined the remnants,” the statement added.

Lebanon's National News Agency had reported that "a surface-to-surface missile landed at dawn in the vicinity of the town of al-Hibbariyeh, during the exchange of fire between the Syrian forces and the Israeli enemy."

It said Lebanese Army experts examined the exploded missile before transferring it to a military post.

LBCI meanwhile reported that another “missile” had landed in the Bekaa town of Qab Elias near a Syrian refugee encampment.

Dozens of rockets were fired from Syria on the Israeli-occupied Golan overnight, a war monitor said Thursday, without confirming Israeli reports they were fired by Iranian forces.

"After the first Israeli bombardment on the town of Baath, dozens of rockets were launched from Quneitra and the southwest of the adjacent Damascus countryside on the occupied part of the Golan Heights," the Syrian Observatory for Human Rights said.

It did not specify who fired the rockets nor what they targeted, but Israeli officials earlier put the number of rockets at around 20 and said they were launched by the Al-Quds force of Iran's elite Revolutionary Guards.

Israel said it was in retaliation for Iranian rocket fire from the Quneitra area that it launched missile strikes on Iranian military infrastructure in Syria.