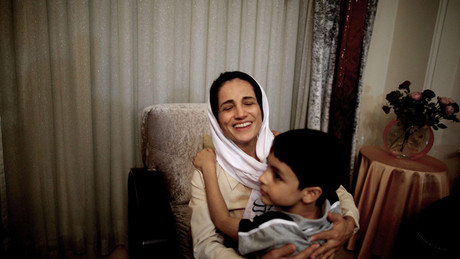 "A few hours ago Nasrin was arrested at home and transferred to Evin," Tehran's notorious prison where many political prisoners are held, her husband Reza Khandan wrote.

Sotoudeh, 55, one of the few outspoken advocates for human rights in Iran, recently represented several women arrested for protesting against the mandatory wearing of headscarves.

Tehran police said in February that 29 women had been detained for posing in public without their headscarves in the previous weeks.

Khandan's Facebook message was defiant, saying: "I once told interrogators in the interrogating room: 'Of all the things the authorities should do for their country, you only know one and that is arresting people.'"

Sotoudeh won the European Parliament's prestigious Sakharov rights award in 2012 for her work on high-profile rights and political cases, including juveniles facing the death penalty in the Islamic republic.

She spent three years in prison between 2010 and 2013 for "actions against national security" and spreading "propaganda against the regime" and remains banned from representing political cases or leaving Iran until 2022.

Sotoudeh has defended journalists and activists including Nobel Peace laureate Shirin Ebadi and several dissidents arrested during mass protests in 2009.

During her time in jail, she staged two hunger strikes in protest at the conditions in Evin and over a ban on seeing her son and daughter.

Sotoudeh was released in September 2013 shortly before Iran's then newly elected President Hassan Rouhani, who had campaigned on a pledge to improve civil rights, attended the UN General Assembly.