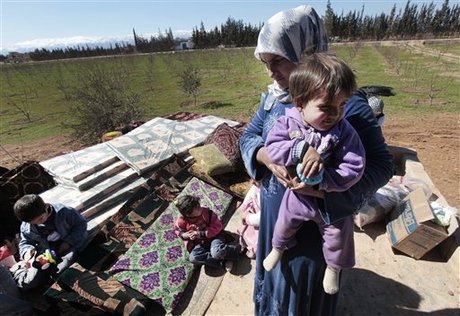 Lebanon's General Security agency announced Monday that it has opened 17 centers across the country that would receive applications for Syrians who want to travel back home.

The statement said Syrians in Lebanon could call hotlines and "regularize" their status with authorities in case of outstanding legal or security problems.

It did not provide details on what was needed for applications or under what circumstances they might be rejected.

Syria's government for its part is to set up a committee to coordinate repatriating millions of its nationals who fled the country's seven-year conflict, state media has said.

The Syrian cabinet on Sunday "agreed to create a coordination body for the return of those displaced abroad to their cities and villages," state news agency SANA reported.

The conflict has displaced more than five million Syrians outside the country, the United Nations says, with more than half displaced to Turkey and most of the rest split between Lebanon and Jordan.

The committee "will take the necessary measures to settle the status of all those who were displaced and secure their return as security and basic services return to different regions," SANA said on Sunday.

It will take steps towards "ensuring they can lead normal lives and practice their jobs as before the war" which broke out in 2011, it added.

The coordination body is to "intensify contact with friendly countries to provide all facilitations and take suitable steps towards their return," SANA said.

President Bashar al-Assad's regime has ousted rebels and jihadists from large parts of Syria since 2015 when its ally Russia launched a military intervention in the country.

But much of Syria lies in ruins, the economy is shattered, and many male refugees voice fear of being drafted into the regime's armed forces.

The proposal includes the establishment of working groups in both Lebanon and Jordan, involving U.S. and Russian officials.

According to the Syrian presidency, Assad told Lavrentiev that "Syria is bent on all its sons returning."

In comments to the Russian media, Assad appealed for Syrian refugees -- especially those who had their own businesses in the country -- to return.

Countries hosting Syrians, including Turkey and Lebanon, have ramped up demands in recent months for refugees to return to safe areas in their homeland.

Over the same period, hundreds of Syrians have left Lebanon in organized returns, coordinated between authorities in Beirut and Damascus.