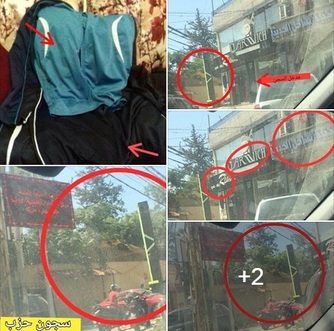 Hizbullah has denied reports accusing it of running “secret prisons” in its stronghold in Beirut's southern suburbs.

“Certainly Hizbullah does not have any prisons,” al-Jadeed television quoted Hizbullah's media department as saying.

“Those who wish can go in person to inspect the commercial institutions and other places” which have been described as sites for Hizbullah's alleged prisons, the department added.

“This is part of a campaign that targets Hizbullah every now and then, especially on social networking websites before reaching media outlets,” Hizbullah's media department went on to say.

The rebuttal comes after the young man Ali Mazloum, who identified himself on Facebook as the son of “Hizbullah martyr leader Hussein Mazloum”, posted pictures of shops and other sites allegedly containing secret Hizbullah prisons.

Mazloum also announced that he had been held in one of the alleged prisons, which he described as being worse than “the prisons of the Israeli enemy.”

He also claimed that “prisoners” are subjected to “beatings and torture with all the physical and psychological methods including food deprivation.”

His allegations were picked up by several media outlets including Saudi-owned Al-Arabiya television.

Hezbollah is as credible as when @mowateh aka giga incorruptible says he is not shia and has only one account, or when @southern says he is patriotic, or even worse when @blablablabla says he is French of European parents and lives in Harissa.

So where did the iranian terror militia hold all those alleged ISIS prisoners that were later swapped for its own terrorists, in a hotel?

"The Army have a checkpoint in every corner of Dahieh, they would've noticed any weird things like you mention."

And if they did notice, what can or will they do? Didn't you say the army and your resistance are one and the same?

No need. For there aren't any.

of course ya irani keep denying as if your paid propaganda matters.

You are the biggest cowards here, making accusations but no guts to come and claim them.

Hizbullah Denies Having 'Secret Prisons' in Dahiyeh and they are correct-ish.. the truth is, the whole of Dahieh is the prison and that's no secret

exibit A, the prisoners
https://www.youtube.com/watch?v=TS2tXgzMAR4

When did they ever admit to anything? They lie through their teeth and straight to your face. The biggest hypocrites. I know these people very well. My hometown is loaded with them.