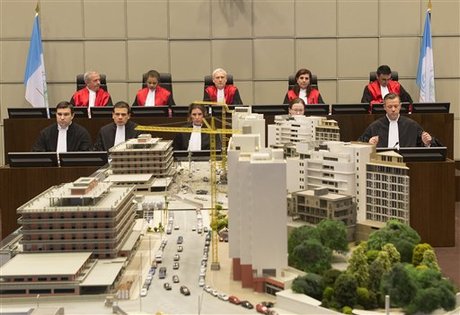 The trial of four Hizbullah suspects in the assassination of ex-prime minister Rafik Hariri enters the final stretch Tuesday with closing arguments in the long-running case.

Hariri's son Saad, Lebanon's premier-designate, will attend the special U.N.-backed court in the Netherlands as prosecutors and defense lawyers make their final statements.

Hariri's office said he arrived Monday evening in The Hague to attend the closing arguments of Prosecutor Norman Farrell. He is accompanied by caretaker ministers Marwan Hamadeh and Ghattas Khoury and former MP Bassem al-Sabeh.

The defendants themselves will be absent, as they have been throughout a extraordinary trial which seeks to bring to justice those behind the huge suicide truck bombing in Beirut that killed Hariri in 2005.

Hizbullah has refused to turn over the four indicted men -- Salim Ayyash, Hussein Oneissi, Assad Sabra and Hassan Habib Merhi -- for the trial which began in January 2014.

The Special Tribunal for Lebanon is unique in international law as it can try suspects in absentia, as well as for its ability to try accused perpetrators of an individual terrorist attack.

Questions remain about whether their absence affects the court's credibility -- and the relevance of the trial to a Lebanon and to a Middle East that has been transformed in the 13 years since the attack.

The tribunal said that two weeks of closing arguments will start with the prosecution on Tuesday presenting "a summary of the case they presented in court since 2014."

Legal representatives for the victims of the attack, which killed 21 people besides Hariri and injured 226, will follow suit, followed by the defense.

A verdict is not expected until next year.

The assassination of Hariri, who was Lebanon's prime minister until his resignation in October 2004, was a pivotal moment in the country's history.

Fingers quickly pointed at Syria after the bomber detonated a van packed with tons of explosives next to his armored convoy on the Beirut seafront on Valentine's Day in 2005.

The bombing triggered a wave of mass demonstrations that ended with the the departure of Syrian forces from Lebanon after a 30-year presence, after which Hariri's son Saad became premier.

But when the tribunal eventually handed down indictments it was not Syria it targeted but instead four alleged members of Hizbullah, which although backed by Tehran and Damascus, is Lebanese-based.

The younger Hariri is about to start his third term in office after a turbulent patch in late 2017 when he announced his surprise resignation during a trip to Saudi Arabia -- which he then rescinded.

A source from Saad Hariri's office confirmed to AFP that he will attend closing arguments without giving more details. An Nahar newspaper said it would be for only one day next week.

"We don't recognize this tribunal, we don't consider it relevant, and we tell anyone who bets on it: don't play with fire," he said in a speech on August 27.

The tribunal quashed a case against the alleged mastermind of the bombing, Hizbullah military commander Mustafa Badreddine, after it emerged he had died while fighting in Syria in May 2016.

Of the remaining four, Ayyash, 50, is accused of leading the team that carried out the attack, while Oneissi, 44, and Sabra, 41, allegedly sent a fake video to the Al-Jazeera news channel claiming responsibility on behalf of a made-up group.

The final suspect, Merhi, 52, was indicted later and his case joined to the current trial.

The court earlier this year threw out a bid by Oneissi to be acquitted.

Much of the prosecution case relies on mobile phone records that allegedly show them conducting surveillance of Hariri until minutes before the explosion.

That's an impressive scale model of the Beirut seaside complete with cars and cranes and everything. I wonder if they could have President Rouhani brings his toy airplanes, pretend to fly over the landscape and make airplane noises, that would be neat!

"Hizbullah chief Sayyed Hassan Nasrallah has repeatedly dismissed the tribunal as a U.S.-Israeli plot."
"John Bolton Threatens ICC With Sanctions If They Dare Investigate US or Israeli War Crimes"

The first time Nasrallah, the US and the Israelis agree on one point.

You want a Christian name for the airport, how about the Michel Samaha International Airport. It's a perfect fit methinks. He's still a highly regarded friend of the thugs that live around it and Iran keeps sending explosives through it. Also a reminder of when you Moukhabarat guys used to control it. What do you think?