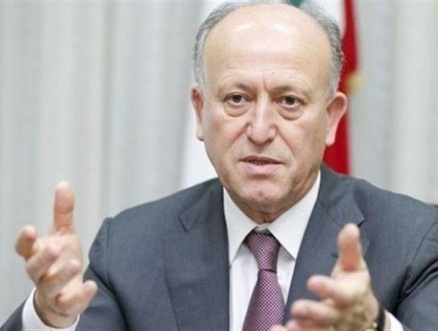 Hizbullah leader Sayyed Hassan “Nasrallah is authorizing the state to dissociate itself while keeping (his own fighters) involved in Syria and Yemen as he stands besides Iran in the face of (US) sanctions,” said Rifi in a tweet.

“Hizbullah is implicating Lebanon financially and economically in favor of Iran and so far we have not heard an official reply to that,” he added.

On Wednesday, Nasrallah announced that his group will stay in Syria “until further notice,” as he noted that “a lot” of Israeli airstrikes in Syria were not targeted against weapons shipments for Hizbullah.

“No one can force us to withdraw from Syria and as long as the Syrian leadership needs us we will stay there,” Hizbullah's chief emphasized.

"We will remain there even after the Idlib accord," Nasrallah said, referring to a Russia-Turkey deal to prevent a Syrian regime offensive on the country's last rebel-held stronghold.

Stressing that Lebanon “cannot be separated from what's happening in the region,” Nasrallah noted that Lebanon's so-called dissociation policy is “a serious controversial issue in Lebanon, seeing as the events in the region are critical for the Lebanese people.”

Later on Thursday, Nasrallah and in an address marking the tenth night of Ashura defied Israel saying Hizbullah had acquired "precision missiles" despite extensive efforts by Israel to prevent the movement developing this capability.

Israel this month acknowledged carrying out more than 200 strikes over the past 18 months in war-torn Syria, where Hizbullah fights alongside Israel's arch-foe and Shiite powerhouse Iran in support of the Damascus regime.

Israel has said it is working to stop both Iran and Hizbullah from acquiring sophisticated arms.

Did those two dead iranian shia terrorists in your avatar do it in Iran's interests?