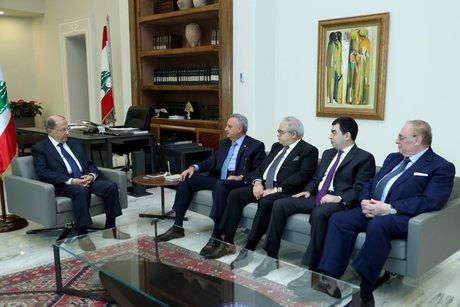 President Michel Aoun and Prime Minister-designate Saad Hariri met with representatives of a number of political parties on Tuesday amid reported progress in the cabinet formation process.

At the Baabda Palace, Aoun met with the 'Mount Lebanon Guarantee' bloc which is led by MP Talal Arslan and comprises the lawmakers Cesar Abi Khalil, Mario Aoun and Farid al-Bustani.

Asked about the wrangling over the third Druze seat in the government, Arslan told reporters: “I have said what I have in this regard to the President and the PM-designate Saad Hariri, detailing what we can do in this regard. I stressed that as a parliamentary bloc in Mt. Lebanon as have the right to be represented.”

“We want to facilitate the process but not on the basis of elimination,” Arslan added.

Asked whether a certain solution had been reached with President Aoun, the MP said: “Any specific solution regarding Druze representation in the government has not been raised with me or with my colleagues. We have done what is needed from us in terms of the needed concessions, and today the ball in not in our court but rather in the court of others.”

Also on Tuesday, Hariri met at the Center House with caretaker Finance Minister Ali Hassan Khalil of the AMAL Movement.

LBCI television said the meeting was aimed at “coordination ahead of Jumblat's meeting with President Michel Aoun.”