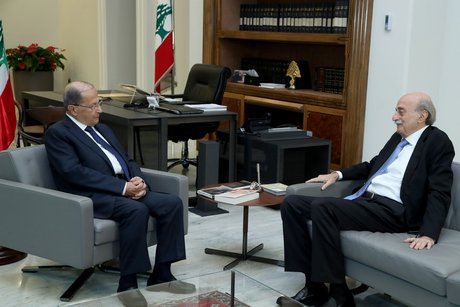 Progressive Socialist Party leader Walid Jumblat on Tuesday said he handed President Michel Aoun a “list” of candidates in order to resolve the spat over the so-called third Druze minister in the new government.

Speaking to reporters after meeting Aoun in Baabda, Jumblat described the talks as “very positive.”

“The Druze obstacle does not exist, seeing as politics is the 'science of compromises,'” Jumblat added.

“We insist on getting the education ministerial portfolio and we don't want any ministry on which there are disputes,” the Druze leader went on to say.

Jumblat had been seeking to get all three Druze seats for his PSP amid insistence by Lebanese Democratic Party leader MP Talal Arslan on being allocated one of the portfolios.

Media reports have said that the solution is based on the appointment of a so-called “consensus” Druze minister.

Earlier in the day, Arslan had announced that he is “open to all solutions that do not involve elimination.”

If Arslan represents nothing politically... why would he get a portfolio?