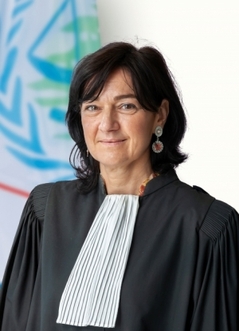 The Head of Defence Office of the Special Tribunal for Lebanon (STL), Dorothée Le Fraper du Hellen, has concluded her first official visit to Lebanon, a statement released by the STL Defence Office said on Friday.

She met with President of the Republic Michel Aoun, Prime Minister-designate Saad Hariri, and the Minister of Justice Salim Jreissati.

During this visit, she discussed with her interlocutors the role and the rights of the Defence before the Tribunal, notably during the trial in the Ayyash et al. case (STL 11-01), which has now reached the deliberation stage.

Le Fraper du Hellen recalled on this occasion the role that the Defence Office has played and continues to play as a statutorily independent organ in promoting and protecting the rights of the Defence and to ensure the equality of arms with the Prosecution.

Le Fraper du Hellen took this opportunity to express her gratitude to the Lebanese State for the support it has given to the work of the Defence before the Tribunal, and thereby to the Tribunal's service to justice.

On behalf of the Defence Office, Le Fraper du Hellen would like to thank all those who contributed to the success of this visit.

she among others of the so-called STL, lives at the expense of the Lebanese people... Shame

She's like the Michel Aoun extended family and relatives.