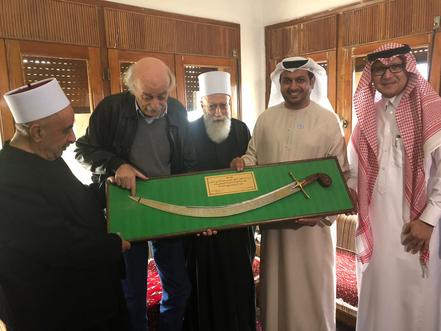 Saudi charge d'affaires in Lebanon Walid Bukhari and UAE Ambassador to Lebanon Hamad al-Shamesi on Friday toured the Mount Lebanon region of Chouf where they inspected a number of institutions and met spiritual and political leaders.

The two envoys' tour included health and religious institutions and was concluded at the house of the head of al-Orfan Institution Sheikh Ali Zeineddine in a meeting attended by Druze spiritual leader Sheikh Naim Hassan and Progressive Socialist Party chief Walid Jumblat.

“I want to emphasize on the historic relation that links the Kingdom of Saudi Arabia to the Druze community in Mount Lebanon,” Bukhari said at the meeting.

“During this visit, we are expressing our love and KSA's support for Lebanon and all its sects and components, especially the dear Druze community which is a main guarantee for Lebanon's patriotism and Arab identity,” the envoy added.