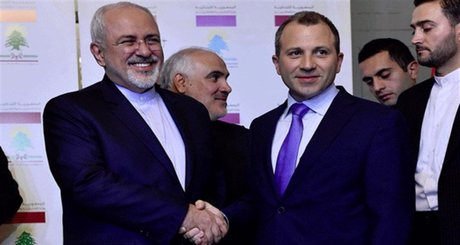 Foreign Minister Jebran Bassil said Monday that “Lebanon does not see any embarrassment in engaging in any type of economic cooperation with Iran as long as that does not breach international resolutions.”

As for the upcoming U.S.-Polish conference on peace and security in the Middle East, which has been depicted as an anti-Iran meeting, Bassil said Lebanon will not attend the talks.

“We explained why we will not be present at the Warsaw conference,” Bassil added, noting that Lebanon will boycott the meeting because “Israel will be present and because of the orientation the conference is expected to take.”

“Lebanon is committed to the dissociation policy,” the minister added.

Turning to the issue of Syrian refugees, Bassil said it is “the most important topic for Lebanon.”

“Minister Zarif voiced support for our demand,” he added.

“We emphasized on the safe return of refugees and that there is no solution for their problem except in their return,” Bassil went on to say.

The minister also said that he “reminded” the Iranian visitor of the case of Lebanese citizen and U.S. green card holder Nizar Zakka, who has been detained in Tehran since 2015 on espionage charges and was sentenced in 2016 to 10 years in prison.

“We called for finding a legal solution,” Bassil added.

Zarif for his part said that "there is total separation between authorities in Iran and the judicial authority is fully independent."

"But we are carrying out the necessary efforts to resolve the matter," he added.