Gemayel: Why Doesn’t Hizbullah Hand its Arms to Aoun if It Trusts Him? 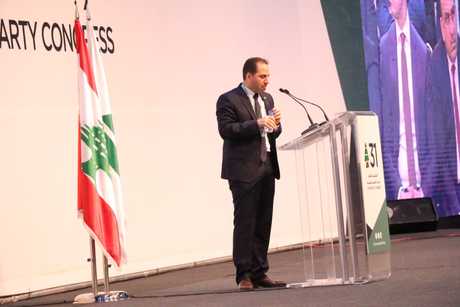 Kataeb Party chief Sami Gemayel lashed out at Hizbullah’s "illegal" arms on Friday, and invited the party to hand its weapons to President Michel Aoun after Hizbullah’s remarks that it “got him to be President.”

“Hizbullah has always said it would hand its arms once they trust the State. You have a President whom you trust, a government that you architected, so why don’t you hand your arms to President Aoun if you trust him?” asked Gemayel in remarks at the Kataeb 31st Congress.

He was referring to Hizbullah MP Nawaf Moussawi’s Wednesday remarks in Parliament when he said that “Hizbullah was able to get Aoun to power by Hizbullah’s rifle.”

“Lebanon’s sovereignty is incomplete. Illegal arms is driving the country into conflicts, undermining stability, weakening the economy, stirring up enmity with other countries,” he added.

On president-elect Bashir Gemayel, he said: “Bashir has taught us to tell the truth. His plan was to dissolve all militias starting with its own militia the Lebanese Forces.”

"We want a free, independent, sovereign Lebanon. We want a country that is pluralistic and civilized," he said, pointing out that Lebanon is “going through a pivotal phase in light of collapse of values, morals, chaos and conflicts over power.”

Why doesn't the elected officials, warlords, heads of political parties (i.e. heads of religious confessions parties), all all Lebanese citizens understand that The Hizbos will only lay down their arms when their masters in Tehran tells them so or when their masters are overthrown.