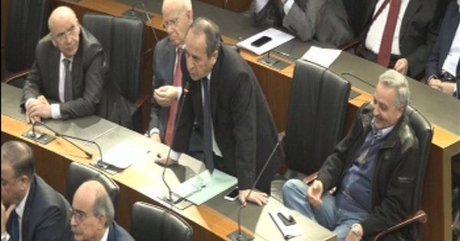 MP Jamil al-Sayyed on Friday engaged in a verbal clash with Prime Minister Saad Hariri, MP Sami Fatfat and a number of Mustaqbal MPs and ministers, as the parliament resumed its debate of the new government's Policy Statement.

The heated exchange erupted when Fatfat hit back at remarks voiced by Sayyed on Tuesday.

“An apology should be addressed to every young man arrested between the years 1992 and 2005,” Fatfat said, accusing Sayyed without naming him of “fabricating cases.”

Sayyed hit back, blasting Fatfat as a “youngster” and a “chick.”

Hariri intervened at this point, telling Sayyed: “It would be better if you don't talk. Respect yourself!”

“This is someone who doesn't respect martyrs and you are letting him talk,” the PM added.

Sayyed snapped back saying, "You respect yourself!"

The MP had on Tuesday called on Hariri to “apologize” over “the four years that the four officers spent in jail,” referring to himself and three other former chiefs of security agencies who were jailed in connection with the 2005 assassination of ex-PM Rafik Hariri before being cleared of any charges.

MP Jihad al-Samad, a member of the Hizbullah-backed Consultative Gathering, had called on Hariri earlier in the session to "begin reform from the Internal Security Forces directorate and OGERO."

“Bashir Gemayel is one of Lebanon's iconic martyrs and is an icon for large segments of the Lebanese and a former Lebanese president. Any attack against him that exceeds political criticism is an attack on national unity,” Aoun said.

And noting that Moussawi had “good intentions” when he said that President Michel Aoun was “elected through the rifle of the resistance,” Aoun lamented that the remarks have been “exploited by some political parties.”

“The Free Patriotic Movement has acknowledged Hizbullah's role in the election of President Aoun as well as that of the Lebanese Forces, al-Mustaqbal Movement and the Progressive Socialist Party, but President Aoun was elected in a purely political process that did not involve any weapons or rifle,” Aoun added.

MP Talal Arslan meanwhile said that Lebanon's Druze are "worried over their fate and existence" and their participation in the political system.

MP Salim Aoun for his part announced that "had it not been for the strong president, we would not have had an electoral law and elections."

"Let us make use of President Aoun's presence in power instead of fearing it," he urged.

MP Ibrahim Kanaan meanwhile said that he "values" Raad's apology, saying "it proves that communication among the nation's MPs and blocs is essential regardless of any disputes."

"The tripartite equation that should be raised in this period is reform, reform and reform, seeing as the state is facing an existential threat in the absence of reform in its finances and economy," Kanaan added.

Speaker Nabih Berri has asked all MPs to be present in parliament before 10:00 pm in order to vote on the government's Policy Statement.

The Policy Statement calls for reforms in state finances, the economy and the crumbling electricity sector, which costs state coffers about $2 billion a year.

The statement also says that “Lebanese citizens” have the right to "resist Israeli occupation and repel its aggression."

Hariri deserves everything he is getting.... and more.